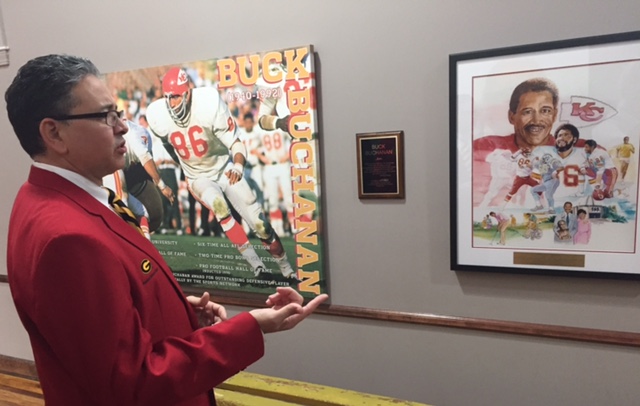 Rick Gallot got word that he was going to the Super Bowl this weekend in the fall while meeting with others, and he was elated. Now that the big weekend is here, he can’t wait to represent Grambling State University and to celebrate the four G-Men who became professional football players and entered the NFL Hall of Fame.

The NFL was scheduled to honor HBCU members of the hall with a Saturday (Feb. 4) breakfast and then recognize them as a part of Sunday’s Super Bowl activities before the Atlanta Falcons and the New England Patriots battle for the NFL championship at 5:30 p.m. (Central Time) at NRG Stadium, where the GSU Tigers won the Southwestern Athletic Conference championship in the fall.

“We’re incredibly excited to be a part of this celebration,” said Gallot, noting that GSU has more NFL hall members than any other Louisiana university, including Louisiana State University, Louisiana Tech University and Northwestern University. “That’s significant in a lot of ways because of our relative size, and considering the fact that we started from some very humble beginnings to produced a program that has produced four members of the hall of fame.”

Of all historically black colleges and universities, only GSU and Morgan State University have four NFL Hall of Fame members. Gallot said about 10 percent of all hall members are from HBCUs, and that highlights “the importance of HBCUs and how we have played a significant role in producing some of the greatest players to ever put on a helmet and shoulder pads.”

Brown played with the Denver Broncos and the Oakland Raiders, playing in 204 games in a 16-season career from 1963-1978. A Yazoo City, Mississippi, native, he intercepted 54 passes, returned for 472 yards and two touchdowns. In Super Bowl XI he intercepted a pass and ran 75 yards for a touchdown.

Buchanan was the first player drafted during the1963 American Football League draft. The Kansas City Chiefs picked him and he made a name for himself. Longtime head football coach Eddie Robinson once called him “the finest lineman I have seen.”

Davis, drafted by the Cleveland Browns drafted in 1956, joined the team after a U.S. Army stint then was traded to the Green Bay Packers. He was a five-time All-NFL player and played in five Pro Bowls and he played in two Super Bowls with the Packers.

Joiner played for the Houston Oilers and the San Diego Chargers for 18 years, longer than any other NFL wide receiver when he retired. The 5-11, 180-pounder was the leading received of all time with 750 catches when he retired at 39 years old after the 1986 season.

Gallot was not old enough to enjoy the players as much as Ellis and Porter, who knew and watched the hall of fame players, so he left them do most of the talking about their gridiron exploits.

“I had the opportunity to see it from both sides of the ball,” said Porter, one of Coach Rob’s longtime assistants who was head football coach at Mississippi Valley State University. “I coached against Buck, unfortunately, and I had the chance to coach Charlie and I had the chance to recruit Charlie when he was coming out of high school. He was probably one of the most dedicated and most disciplined football players I had a chance to work with.”

Porter said the longevity of their NFL careers “shows what Grambling can produce.”

He recalled when Robinson and GSU basketball coach Fred Hobdy would get together and Coach Rob would tell him how strongly he felt about these guys. “Coach Robinson used to tell coach Hobdy and I about it. He said, ‘Boy, if I could just keep those guys together, hell, I’d coach forever,” said Ellis, quoting Robinson. “’I’d go to heaven, come back and coach again, go back and coach again.’”

Ellis said he is “happy to see the NFL salute and honor these great individuals,” and he is grateful to the NFL for including Gallot as a part of the weekend Super Bowl activities.

Bryant, who joined GSU in January after the NFL issued invitations to HBCU presidents with NFL hall of fame members, joked that he was disappointed that the league didn’t invite the athletic directors. After all, he said, Sunday (Feb. 5) is his birthday.