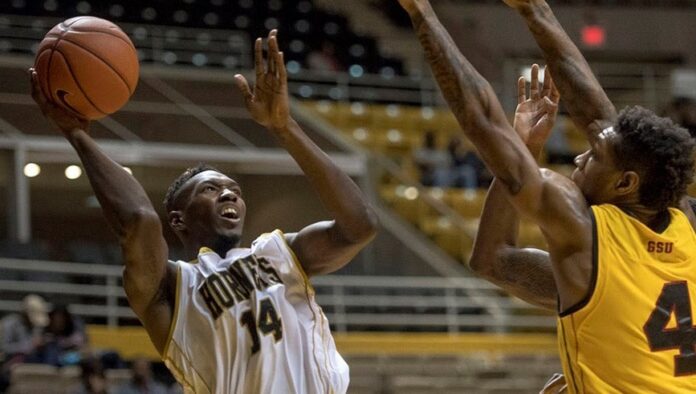 After the first media timeout of the first half (15:58), the Hornets held an 8-4 lead over the Tigers as Tony Armstrong and GSU each at four points.

ASU went up by as many as ten in the first half before Grambling State battled back, taking the 33-32 lead at the 2:49 mark in the first.

Heading into the locker room, the Tigers were able to hold onto a narrow 38-32 advantage.

Armstrong continued to lead the Hornets at the half with a team-best nine points, eight boards and one steal while Rodney Simeon trailed with eight points.

Despite trailing, ASU led on the boards outrebounding the Tigers 20-to-17, while forcing GSU to nine turnovers compared to the Hornets six.

During the first break of the second half, the Tigers went ahead 40-35 with 15:48 left in the contest.

It was all Hornets for the remainder of the game as ASU was able to hold onto a 73-69 SWAC victory.

The Armstrong and Simeon duo led the Hornets offensive effort, finishing with 17 and 19 points respectively while Armstrong also led on the boards, pulling down nine off the glass.

Alabama State returns to action on Wednesday, Jan. 4 as the Hornets host Jackson State at 7:30 p.m.