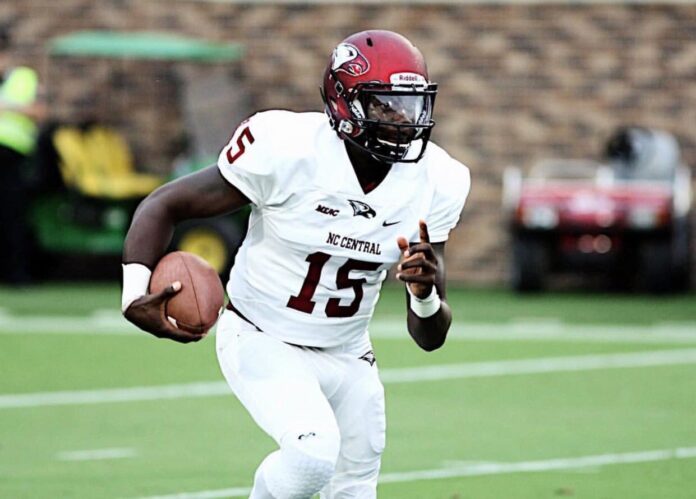 After winning the MEAC championship three consecutive years and not having lost a game to an FCS opponent in a calendar year, North Carolina Central will be playing the role of underdog in the Air Force Reserve Celebration Bowl.

One Las Vegas oddsmaker made the Eagles a 15-point underdog to SWAC champion Grambling State to the chagrin of NCCU quarterback Malcolm Bell.

“We just feel disrespected as one of the top FCS teams in the nation,” Bell said. “How could you be a 15-point underdog? But we’re just gonna go out there and have a chip on our shoulder just like every other game.”

When asked would the point spread be a motivating factor come Saturday, Bell said coaches sent out a text to all the players notifying them of their underdog status.

We’re the new kids on the block, so to speak, we haven’t been in the conference very long so people are still trying to say that we aren’t there yet, we haven’t arrived yet. That’s just who we are are.”

NCCU head coach Jerry Mack said the team has been considered afterthoughts all season, and will once again look to change the opinion of the team.

“It’s been the same all year. We came into this season as the underdogs. Nobody gave us a chance. We were picked third in the conference. We didn’t receive any television games, so we’re just kinda used to it,” Mack said. “Any kind of momentum or any kind of things like that that our team can use is always good for our guys.”

Being 10-1 has served well for Grambling State football recruiting.

Grambling head coach Broderick Fobbs, speaking to the media ahead of the team’s trip to the Celebration Bowl, said recruiting has picked up in the wake of the program’s recent success.

Winning the SWAC championship and playing in a nationally televised bowl game has created more interest in the program, said Fobbs.

“It’s definitely picked up because winning is contagious and people want to be a part of a winner,” Fobbs said. “The thing that’s interesting is a lot of people are noticing the fact how we’re handling our athletes. Our athletes are treated with love at Grambling State University.”

On the call for the second installment of the Air Force Reserve Celebration Bowl will be Mark Neely, Jay Walker in the booth and Tiffany Greene will serve as sideline reporter.