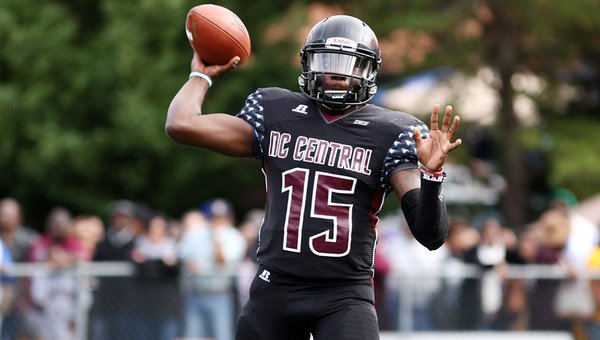 The Georgia Dome in Atlanta will be filled with talent and determination as some of the best college athletes and coaches in the country compete in the 2016 Celebration Bowl matchup Dec. 17.

“This is the first Celebration Bowl for us,” Malcolm Bell, NCCU’s quarterback said. “Honestly, it’s nothing different about this game besides the huge audience and atmosphere, but at the end of the day football is football.” It all comes down to who wants it more and who executes the best.”

The Virginia native says in order to defeat the Tigers it’s vital that they come out with energy, effort, execution and enthusiasm.

“Those things alone can give us the winning edge along with discipline,” he said.

Both teams are led by two of the best coaches in the FCS, GSU’s Broderick Fobbs and NCCU’s Jerry Mack.

Earlier this week the American Football Coaches Association (AFCA) named NCCU’s Jerry Mack, Regional Coach of the Year, becoming only the second coach in NCCU history to earn the AFCA award. George Quiett, being the first in 1972.

Both Mack and Bell hope to lead the Eagles to a Celebration Bowl win after missing out on an opportunity to play in the bowl game after falling short against rival North Carolina A&T, who represented the MEAC in the game last year against Alcorn State University.

“We came out this year and decided that we were not going to be denied,” Bell said. “We played with a chip on our shoulders from not making the Celebration Bowl last year, and it stuck with us throughout the year.”

Bell began playing football at NCCU in 2012. He said he chose to play with the Eagles because he fell in love with the school’s atmosphere and tradition.

Bell described his coach as being detailed, relentless, and intelligent.

“Coach often tells us to play “Championship caliber” football”, the quarterback said. “Just going out and having that swagger about yourself and your teammate’s makes games a lot easier.”

Bell’s impact and contribution to the great season this year was definitely recognized. The player made history by being the first NCCU player to run for more than 1,000 yards and throw for over 4,000 yards in a college career. He was a first-team All-MEAC selection this season, leading the league in average total offensive yards per game (248.6).

“Malcolm was introduced to sports at an early age and understood the level of commitment and dedication required to be successful,” they said. “We are most proud of his humble manner and relentless execution in reaching his dreams.”

To prepare for Bell’s last chance to take the Celebration Bowl title, he says the Eagles have been going through regular game preparation, making sure they watch film and just practicing hard.

“My role has been pretty simple,” he said. “Basically get the job done by any means necessary and always provide that spark that is needed to separate us from the opposing team.”

Whereas, the competition will be stiff for Bell and the Eagles, as the Tigers are being led by Fobbs, who took home his third-straight SWAC Coach of the Year award after leading the Tigers to a second-straight nine-win season as well as an unblemished record in conference play for the second-straight year.

Grambling State currently stands as the only team in the nation (FCS) ranked in the top six in scoring offense and defense.

The Tigers showed just how resilient they are after being down 17-0 after the first half against Alcorn State in the SWAC Championship game, but were able to come back and win the game 27-20.

Bell says playing 60 minutes with high energy and relentless effort will make sure that a slow second half won’t be an issue for Eagles.

Grambling’s DeVante Kincade has come to play and come to win. He received the SWAC Offensive Player of the Year award. He has completed 202 of 309 passes for 2,870 yards with 30 touchdowns. Kincade ranks third in passing efficiency (172.8) among FCS quarterbacks and No. 1 in the SWAC.

GSU’s running back, Martez Carter, is also a player the Eagles need to keep their eyes on. Carter was named the Offensive Most Valuable Player for the SWAC Championship game. He broke the conference championship record for all-purpose yards with 348.

HBCU SpotlightTV tweeted, “If you are Coach Mack and North Carolina Central, your first priority should be finding a way to slow down Martez Carter.”

With such consistent players, coaches and fans on both sides of the field, the matchup is going to be one for the books!

“It’s kind of hard to put winning in the back of your mind, especially in a game with so much on the line, so I think we’ll use that as motivation to come out and handle business,” Bell said.

After not being eligible to play in the game last year, Bell plans to do everything it takes to walk away a Celebration Bowl championship.

“We’ve made history as a program already this year, so it would be great to add an HBCU National Championship win to that.”

Bell graduates on Dec. 10 and plans to pursue a career as a professional athlete.