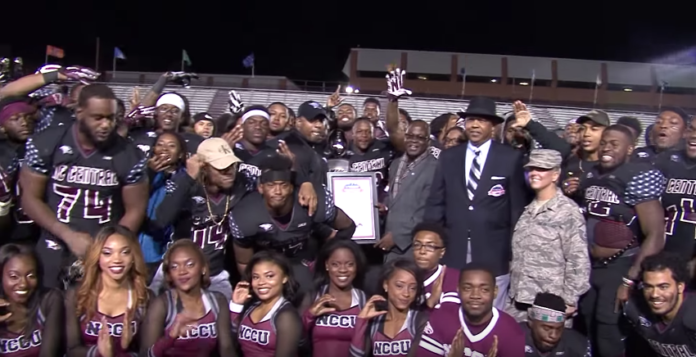 DURHAM, N.C. – North Carolina Central University was tired of sharing. After earning conference co-championships in each of the last two seasons, NCCU captured the Mid-Eastern Athletic Conference title outright and a bid to the second annual Air Force Reserve Celebration Bowl with a 42-21 victory over rival North Carolina A&T State University inside an overflowing O’Kelly-Riddick Stadium on Saturday.

For NCCU (9-2, 8-0 MEAC), the 20th-ranked team in the FCS Coaches Poll, it is the first time in the gridiron program’s history the Eagles have won three straight conference championships. And like the previous two, this regular season ends with a triumph over its nationally-ranked rival.

North Carolina A&T (9-2, 7-1 MEAC) entered the contest at No. 9 in the coaches poll and with the nation’s fifth-ranked run defense, but NCCU senior quarterback Malcolm Bell and sophomore running back Dorrel McClain combined for 240 yards and five touchdowns on the ground. The Aggies had not allowed a 100-yard rusher all season… until Saturday. Bell rushed for a game-high 131 yards and two touchdowns, while McClain tallied 109 rushing yards with three trips to the end zone.

Bell added 184 yards and a touchdown on 10-for-18 passing to finish with 315 yards of total offense. His scoring toss traveled 24 yards to the left hand – and only the left hand – of junior receiver Khalil Stinson for a spectacular catch. Senior wide receiver LaVontis Smith had a team-best for receptions for 83 yards.

And while the NCCU offense posted the most points against the Aggies since 1984 and the second-most in the 88 match-ups of the series, the Eagles also soared defensively. Tarik Cohen, the nation’s third-leading rusher with 1,436 yards prior to Saturday, was held to just 82 yards and an average of on 3.6 yards per carry.

Senior linebacker LeGrande Harley amassed a game-high 10 tackles, including 1.5 of NCCU’s eight stops behind the line of scrimmage. Sophomore safety Alden McClellon collected eight takedowns, including a hit for a loss with a forced fumble, a fumble recovery and a pass break-up. Fellow sophomore safety Davanta Reynolds also had eight tackles with 2.5 hits for a loss. Yet another sophomore safety Jaquell Taylor and junior cornerback Mike Jones recorded interceptions for the Eagles.

NCCU has now won 15 in-a-row against MEAC teams and boasts a 21-3 record versus league foes in three seasons under head coach Jerry Mack, including a 3-0 mark against the Aggies.

With the outright MEAC title in hand, the Eagles will prepare to take on the SWAC champion in the second annual Air Force Reserve Celebration Bowl inside the Georgia Dome in Atlanta on Dec. 17 at 12 noon, televised on ABC.