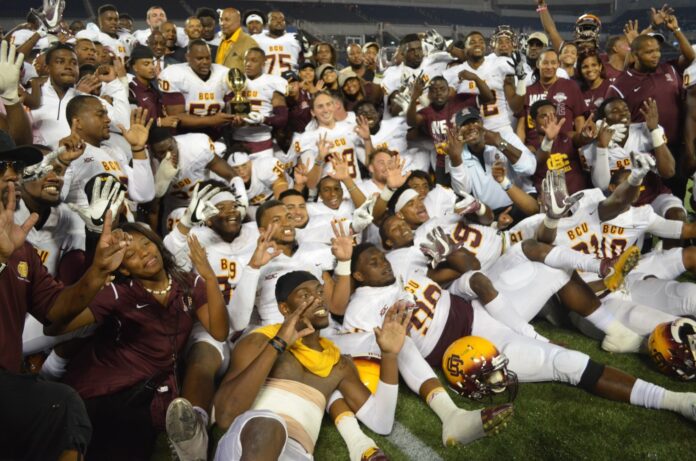 ORLANDO, Fla. – Larry Brihm, Jr. was named MVP from Bethune-Cookman on Saturday, Nov. 19, as the Wildcats rolled past rival Florida A&M, 39-19 in front of 45,372 fans inside Camping World Stadium with B-CU collecting its unprecedented sixth consecutive win over FAMU in the annual Florida Blue Florida Classic.

After allowing the Rattlers to open the game with a 3-0 lead on their opening possession, it was Bethune-Cookman (4-5, 4-3 Mid-Eastern Athletic Conference) scoring on each of its next three drives to secure an insurmountable 21-10 lead at the half.

Redshirt junior receiver Frank Brown hauled in the game’s opening touchdown on the end of a 14-yard strike from Larry Brihm, Jr. with 4:58 remaining in the opening quarter. Adding the extra point from Uriel Hernandez, and the Wildcats led 7-3 early-on.

Florida A&M (4-7, 4-4 MEAC) opened the game marching 55 yards down the field on 11 plays to setup a Colby Blanton 37-yard field goal to give the Rattlers the 3-0 advantage just four minutes into the contest.

On B-CU’s second possession, it was a fast-paced drive highlighted by a Tupac Isme three-yard scoring run that saw the Wildcats go 11-points clear of the Rattlers courtesy a 14-3 advantage with 2:35 showing on the clock in the opening stanza.

The ensuing drive for the Wildcats was capped with Jamaruz Thompkins collecting the first of his game-high matching two rushing touchdowns with a one-yard plunge into the end zone, extending the Cats’ advantage at 21-3.

With Bethune-Cookman holding onto a 21-13 advantage heading into the fourth quarter, B-CU second-year head coach Terry Sims rolled the dice on fourth down and four, using Akevious Williams to escape a heavy FAMU rush and scamper 11 yards into the end zone for the score. That put the game out of reach at 27-13.

Florida A&M added a late touchdown to cut into the score at 33-19, using Devin Bowers’ three-yard surge into the end zone for the score.

But in the end, it was B-CU’s Thompkins with his second touchdown, giving him 11 rushes for 64 yards and a pair of scores via the ground that led to the final 39-19 decision in favor of the Maroon and Gold.

For Bethune-Cookman, the win was the team’s fourth consecutive after suffering through injuries and Hurricane Matthew that led to the Cats beginning the campaign 0-5. Since that time, the Cats and Head Coach Terry Sims have rolled off four consecutive with an average margin of victory at 22.3 points per game.

Brihm finished the game 21-of-27 passing for 270 yards and a score through the air on the connection to Brown. Brown also led all receivers with seven catches for 67 yards.

Trenton Bridges led the defense with eight tackles, while Diquan Richardson collected five tackles and an interception – his third of the season.

The FAMU defense was sparked by Quenteze Gallon with 13 tackles, followed by Terry Jefferson with nine.

The offense was led by quarterback Ryan Stanley with an 11-for-25 passing day for 84 yards, while rushing for 57.

Bethune-Cookman concludes the 2016 season next Saturday when the Wildcats visit Orangeburg, South Carolina to take on the South Carolina State Bulldogs at 1:30 p.m.