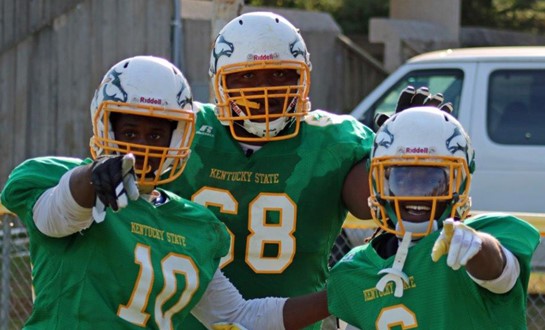 Frankfort, Ky.—Kentucky State University football will embark on the program’s first–ever opportunity at an SIAC football championship against Fort Valley State University on Saturday in the Cramton Bowl in Montgomery, Ala. at 7 p.m. ET.

The Thorobreds (4-6, 4-3) joined the SIAC in 1997 and only finished as high as second place in the conference till this season. The Wildcats (4-6, 4-3) snatched a victory away from heavy favorite Albany State a week ago, 21-17. This will be the first time FVSU has played for a conference title since 1999. KSU defeated FVSU earlier in the season on Oct. 8, in a convincing 26-10 contest at Wildcat Stadium.

“We have to go into this game with focus,” said head coach John L. Smith. “It would be very special for these guys to go out as conference champions.” [easyazon_infoblock align=”right” cart=”y” identifier=”B01IC47SN2″ locale=”US” tag=”hbcusports-20″]

Heading into the championship game the KSU offense continues to maintain a steady pace of improvement. Statistically, the Thorobreds’ attack has improved every game with the exception to the Oct. 22 matchup at Tuskegee University. Against SIAC opponents the rushing game ranks No. 2 in the conference with 164 yards per game.

Senior running back Reginal Harris leads the way for the offense ranking as the No. 4 rusher in the conference with 592 yards and No. 4 in total touchdowns with seven. Harris is coming off a career performance against Benedict College, where the Miami, Fla. native notched 195 yards on 18 carries and added a pair of touchdowns, including a season-long 48-yard score. He averaged 10.8 yards per carry against the Tigers, and caught three passes for 34 yards including another touchdown.

“Our offensive has continued to get better as the season has progressed, once guys play together, the unit gets better as a whole,” said Smith. “Our running game with Reggie (Harris), Lavelle (Cloyd), and Damontre (Warr) have done a good job of making guys miss. Plus, we’ve had the same five guys over these last five games up front, blocking for them, and it has helped us.”

In the final regular season game, senior linebacker Travon Spencer made history by eclipsing the 100 tackle plateau, finishing the season with 103 wrap-ups. No other Thorobred has reached the 100 tackle mark since the program started competing as a NCAA D-II institution.

As a unit the KSU defense ranks as the No. 4 squad in pass defense, only allowing 161 yards through the air per game. Leading the way in the secondary has been the coverage of senior safety Vince Edwards and junior cornerback Ryan Luckett. Edwards ranks No. 3 in the SIAC for tackles by a defensive back with 68, while Luckett ranks No. 1 in fumbles forced with three.

KSU also ranks as the No. 1 defense in all of the SIAC in red zone defense. Opponents are only scoring 62 percent of the time when they cross the KSU 20-yard line. On 42 opportunities, opponents have only scored 26 times, and have turned the ball over four times or have been forced out on downs by the stingy KSU defense on six occasions.