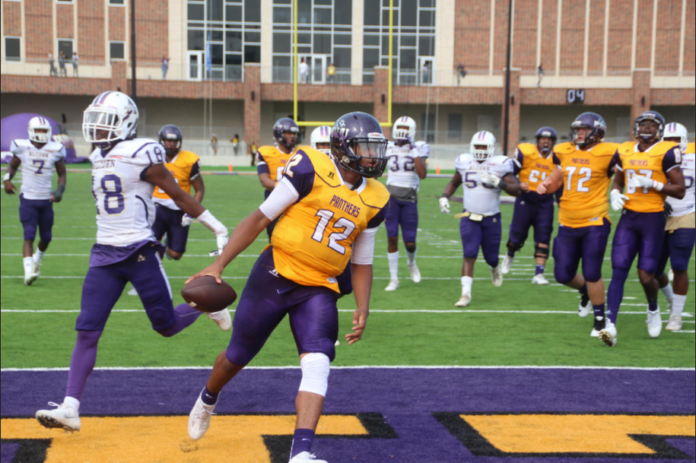 This weekend the Prairie View A&M University Panthers defeated the defending SWAC Champion Alcorn Braves in a 31-27 nail biter. The victory improves the Panthers record to 6-3 and secured PVAMU’s second consecutive winning season under Head Coach Willie Simmons. These are the biggest takeaways for the Panthers as they prepare for a SWAC West showdown with the Southern Jaguars this weekend on “The Hill”.

Though redshirt freshman quarterback Jalen Morton has played in 8 of the Panthers’ 9 games, Saturday afternoon marked just his third start of his collegiate career. Throughout the season Morton has displayed poise and skill not typically seen in a young quarterback. However, Morton’s inexperience showed this weekend as he threw 3 interceptions and was only able to complete 34 percent of his 29 pass attempts for 100 yards. Luckily for the Panthers, Morton accounted for 4 total touchdowns on the afternoon. Two touchdown passes; one on a screen pass to Sta’fon McCray as the first half wound down, and another early in the third quarter on a play where Morton bought time with his legs and was able to find a wide open Darius Floyd in the back of the end zone for a score. Morton also accounted for two scores with his legs, with his 13 yard touchdown run on a zone read playgiving PV is first lead of the game. Coach Simmons showed about his young quarterback postgame saying “He’s a young guy, this was just his third start in college football. We’re going to be patient with him, right now we feel like he gives us the best chance to win, and we’re going to go with him until that’s not the case anymore”. He continued saying “we’ve got complete confidence in him, and he’s got a bright future ahead of him”. In order for PVAMU to keep their postseason hopes alive, Morton will have to settle down, take what the defense gives him and not force the ball into tight coverage in their final two regular season contests against Southern and Arkansas Pine-Bluff.

2) Prairie View’s running backs are coming on strong as the season comes to a close
[easyazon_infoblock align=”right” cart=”y” identifier=”B016LG89VS” locale=”US” tag=”hbcusports-20″]Replacing one running back is tough, but replacing a trio of talented runners is an incredibly tall task. That is what the Panthers had to do this season as they lost the electrifying FCS All-American Johnta Hebert, the bruising Courtney Brown, and the tough running Fred Anderson to graduation. They were replaced by the freshman tandem of Caleb Broach and Dawonya Tucker, and a junior college transfer Sta’fon McCray. In addition to the new tailbacks, PVAMU was also replacing three starters on the offensive line. As a result, the trio struggled a bit early on through the first five games of the season. The Panther running backs only topped 115 combined rushing yards once, thanks to McCray’s 192-yard outburst against Alabama A&M, which propelled the Panthers to a 21-point victory. During the past three contests McCray, Tucker, and Broach have been able to find a rhythm on the ground, combining for 157, 146, and 133 yards and averaging more than 4 yards per carry. If this talented trio of tailbacks can continue to produce and alleviate pressure off of Jalen Morton, it gives the Panthers a great chance to win.

3) PVAMU was able to overcome another slow start at home
In all three of Prairie View A&M’s football games at new Panther Stadium, drama has certainly not been lacking. The Purple and Gold fell behind by double digits at Panther Stadium against Alabama State and Texas Southern, and were able to narrowly claw their way to victory on both occasions. The PVAMU offense stumbled out of the gates yet again this week. The Purple and Gold’s first six possessions of the game resulted in either an Owen Hoolihan punt or an interception. The Panthers mustered just 85 total yards in the first half, which helped Alcorn State jump out to a 14-0 lead midway through the second quarter. However, PV would score 31 points in the final 30:32 of the game, and held the explosive Braves offense to just 13 points to send them back to Lorman, Miss. in possession of their fifth loss of the season. “Hopefully, we can figure out why we keep starting so slowly. I don’t know if it’s what we’re eating, where we staying. I don’t know, but we have to figure something out,” Simmons said. PVAMU can ill afford another lethargic start next week against the SWAC West division co-leading Southern Jaguars, led by Lenard Tillery, Austin Howard and Willie Quinn. Simmons said just as much adding, “We have a really good Southern team coming in right now that’s undefeated in conference play. It’ll be hard to start slow against that bunch, and be able to beat them. We have to come faster next week”.