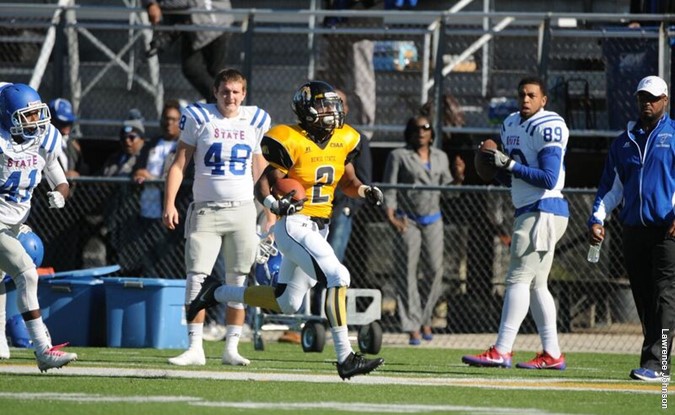 BOWIE, Md. – The objective of the day was simple … Win! From the opening possession, that’s exactly what Bowie State football did on Saturday afternoon, routing Elizabeth City State 56-7 to win the CIAA Northern Division title and punched their ticket to the CIAA Championship game. The 56 points were the second highest all-time for Bowie State versus Elizabeth City State and the highest point production of the year for the Bulldogs.

Prior to the game, 13 Bowie State seniors were honored along with a special Senior Day presentation to ECSU senior Victor Tabbs (Suitland, Md.) who tragically loss his father a week ago which did not allow him to take park in Senior Day at the Vikings home finale.

Elizabeth City State (5-5, 4-3 CIAA, 3-2 North) were led offensively by quarterback Daquan Neal (Franklinton, N.C.) with 202 passing yards, completing 16-of-36 (one interception). Neal scored ECSU’s only touchdown of the afternoon on a 3-yard run early in the second quarter. Deshon Saunders (Suffolk, Va.) was the leading ground gainer for the Vikings with 79 yards on nine carries. James Roe (Richmond, Va.) and Montrez Brunson (Norfolk, Va.) caught three pass each for 65 and 21 yards respectively in the loss.

Bowie State opened the scoring on a Chesson 57-yard scamper just 45 seconds into the game. Freshman Gene Carson (Accokeek, Md.) added the extra point for the early 7-0 lead. A Hall 1-yard run around the left side gave the Bulldogs a 14-0 lead at the 9:47 mark of the first quarter. On ECSU’s next possession, Bowie State blocked a Joshua Laverty (Edenton, N.C.) 30 yard field goal attempt and scooped up by sophomore Bryson McAdams (Odenton, Md.) for an 82-yard return for a touchdown to push the Bulldogs lead to 21-0.

Bulldogs sophomore Maurice Williams (Baltimore, Md.) scored his fourth TD of the season at the 7:45 mark of the second quarter from five yards out and Chesson followed that with a four yard score a little over four minutes later to extend the Bowie State lead to 35-7 at the half.

Hall and Chesson teamed up for an 8-yard pass, catch and score with 5:55 left in the third quarter. Graduate student Tony Squirewell (Upper Marlboro, Md.) recorded his first touchdown of the season when he hauled in a 48 yard pass from Hall with 2:46 remaining in the third to extend the Bowie State lead to 49-7.

The Bulldogs closed out the scoring early in the fourth quarter on a Hall to sophomore Deron Smith (Bowie, Md.) from 55 yards away to account for the final 56-7 margin.