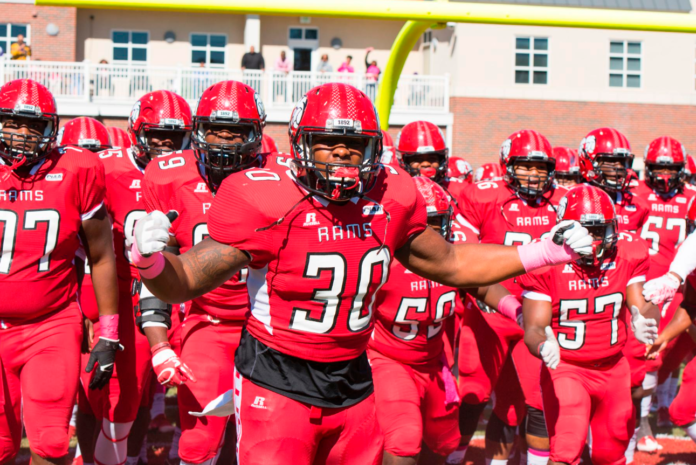 WINSTON-SALEM, NC – Winston-Salem State jumped out quick on the Livingstone Blue Bears, and got a big day from the defense with eight sacks, and 19 tackles for a loss, as the Rams rolled past Livingstone, 40-21 on Senior Day at Bowman Gray Stadium.

It didn’t take long for the WSSU Rams to gain control of this game, as on the third play from scrimmage, Joe Wright would sack the Blue Bears quarterback in the endzone for a safety, to give WSSU a 2-0 lead. [easyazon_infoblock align=”right” cart=”y” identifier=”B01AGL2BU4″ locale=”US” tag=”hbcusports-20″]

After the free kick to the Rams, on the second play, Rod Tinsley would scramble and take off downthe left sideline and race 60 yards for a score to give WSSU a 9-0 lead.

The Rams defense came to play on this day, and after holding Livingstone to a three and out, and only a seven yard punt into a strong wind,

WSSU would score again on their next possession, as Rod Tinsley would find an open Quincy Jackson in the back of the endzone for a 17 yard touchdown strike, to put the Rams out in front 16-0.

Winston-Salem State would find the endzone again on their next series, as a Rod Tinsley to Will Walton pass and catch for an eight yard touchdown, gave the Rams a 23-0 advantage.

The Rams next score came on a one play drive, as Rod Tinsley would throw his third touchdown of the quarter, this time to Demeeko Jones, from 45 yards out to push the Rams lead to 30-0.

Livingstone College would finally get on the board with 2:36 left in the first quarter, as Jarius Richardson would score from four yard out to cut the lead to 30-7.

With no scoring in the second quarter, the WSSU Rams would take a 30-7 lead into halftime.

The only score in the third quarter came from the Blue Bears, as Latrell Flowers hauled in a six yard pass from Xavier Longerbean to bring the score to 30-14.

In the fourth, the Rams would put the game away for good, when PJ Clyburn picked off a Xavier Longerbean pass, and returned it 40 yards to the endzone for anther WSSU score, bringing the Rams advantage to 37-14.

The Blue Bears would cap a long 80 yard drive, when Andrew Gamble scored on a pass from Thaddeus Bell.

The final score of the game would come off the foot of Will Johnson, as he would connect on a career long, 50 yard field goal, to bring the final score to 40-21.

The WSSU rushing attack was led by Te’Vaughn Hurse, who finished the afternoon with 90 yards on 20 carries, while Rod Tinsley rushed five times for 63 yards and one score, including a 60 yard score early in the game. Kerrion Moore finished with 41 yards on nine carries.

Rod Tinsley has an outstanding game, completing 7 of 16 passes with one interception for 119 yards and three touchdowns, including a long pass of 45 yards.

The receiving corps for the Rams was led by Demeeko Jones, who caught two passes for 47 yards and a touchdown and Te’Vaughn Hurse also had two catches for 31 yards. Quincy Jackson had one catch for a 17 yard score, and Kerrion Moore (16 yds) and Will Walton, each had one catch, with Walton scoring on an eight yard pass and catch.

Will Johnson punted seven times for an average of 40.6 yards per punt, while also connecting on a career long 50 yard field goal. He also had four touchbacks on kickoffs.

Winston-Salem State would be on the road next week, as the Rams will travel to Raleigh, NC to take on the Bears of Shaw University. Kickoff is scheduled for 1:00pm at Durham County Stadium.