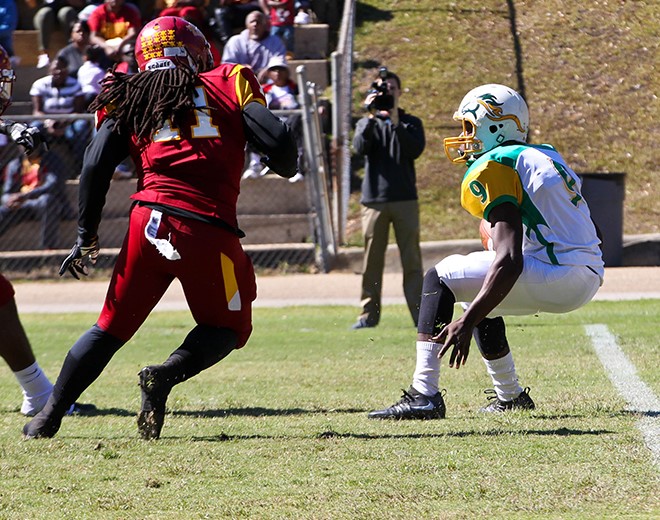 Tuskegee, Ala.—Kentucky State University football notched one of the biggest victories in the program’s history with a 10-9 defeat of  No.5 ranked Tuskegee University at Cleve L. Abbott Memorial Alumni Stadium on Saturday.

“This game was unbelievable,” said head coach John L. Smith. “I’ve been a part of some monumental wins, but I’ve never been a part of a team that defeated a top-five ranked opponent on the road. Plus we blocked two field goal attempts to do it; you have to give it up to our special teams and our defense.”

After leading 10-3 for a majority of the second half, Tuskegee looked to tie the game in the closing moments. With 1:25 remaining in regulation, the Golden Tigers pushed across a one-yard touchdown, bringing the game to a 10-9 KSU lead, and the extra point awaiting. On the attempt, junior defensive lineman Donovan Cecil broke through two blockers to swat the extra point attempt, leaving the Thorobreds on top. [easyazon_infoblock align=”right” cart=”y” identifier=”B01LY9JHKC” locale=”US” tag=”hbcusports-20″]

In the final minute of the game, the Thorobred offense went three and out, as TU burned through their final three timeouts to get the ball back. Following a short punt, a 25-yard return, and a KSU penalty. TU started the final drive from the KSU eight-yard line. Failing to punch the ball into the end zone and time running down, the Golden Tigers attempted an 18-yard field goal. Junior defensive lineman Rodriquez Jones jumped the snap, broke through the line to block the Golden Tigers attempt at a game-winning field goal, to give the Thorobreds thrilling the victory.

The win by the Thorobreds (4-4, 3-0) marks the first time KSU has defeated both Miles Colleges and TU in the same season since joining the SIAC in 1997. It also marks the first time KSU has knocked off a top-five ranked opponent in NCAA Division II. Now KSU sits in prime position to win the program’s first ever SIAC West Division title to earn a spot in the SIAC Championship game.

“No doubt this win feels good right now,” said Smith. “But we have to take care of business next week against Lane College on our home field. Our goal remains the same; we want a conference title.”

The defense was the focal point throughout the afternoon for KSU, only allowing 261 yards of total offense and just 98 rushing yards on 21 attempts. Anchored by Jones and Cecil, the defensive line bullied their way through, picking up six tackles for a loss and four sacks. Senior linebacker Travon Spencer and sophomore linebacker Keonte Reynolds each led the team in tackles with 11 apiece. Jones finished his day with five tackles, including one and a half sacks. Cecil tallied four wrap-ups along with a sack and a half.

Offensively, the Thorobreds spent the day grinding with the Golden Tigers, accumulating 194 yards of total offense, including 121 yards on the ground. Senior running back Darmontre Warr racked up a career-high 99 rushing yards, while freshman quarterback Jules St. Ge added 97 yards and a touchdown of his own on the ground.

Sophomore wide receiver Demetrius Anderson picked up five catches for 62 yards including a 49-yard reception on a slant route in the third quarter, setting up a 29-yard field goal by senior Bill Rose to put KSU up 10-3. Alongside Anderson, junior wide receiver Corey Slaughter recorded a season-high five receptions for 35 yards.