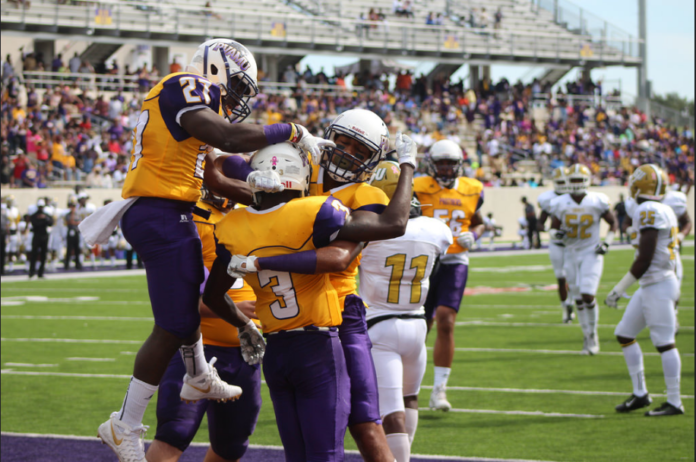 The Prairie View A&M Panther football team will return to the gridiron against Rice this weekend after a much needed bye, following an improbable come from behind victory in an overtime thriller against the Hornets of Alabama State. The Panthers, who tout a 4-2 record currently, sit 3rd in the uber competitive SWAC West behind perennial powers Southern and Grambling. As Willie Simmons’ squad begins the stretch run of the 2016 campaign, these are the top three takeaways from the initial half dozen contests of the season. [easyazon_infoblock align=”right” cart=”y” identifier=”B011E4HD78″ locale=”US” tag=”hbcusports-20″]

1. Trey Green must take better care of the football

Coming into the 2016 season, there was arguably no bigger name in the SWAC than Trey Green, and for good reason. In the 2015 campaign Green had an amazing junior season throwing 21 touchdown passes and just three interceptions, while completing nearly 60 percent of his pass attempts leading the Panthers to an 8-2 record. So far, Green has not been able to replicate the success he experienced in 2015 season. The Panther signal caller has certainly sputtered to begin the season, as his passing statistics are down in every major category excluding interceptions. The Beaumont, Texas native has more than tripled his interception total from the 2015 campaign, having thrown 10 picks to just eight touchdown passes in six games played. In order for the Purple and Gold to have a chance to close the gap in the SWAC West, Green will need a return to form during the second half of the season.

2. The Prairie View A&M defense is much improved

Following the 2015 campaign the biggest question emanating from Panther Nation was whether the Panthers could improve enough defensively to contend for a SWAC championship. Through the first half dozen games, that inquiry has certainly been answered with an emphatic yes. During the first five conference contests last season, the Prairie View defense surrendered an average of 35 points per game. This season the Panther defensive unit has allowed just 23 points per game in its first five SWAC games, currently leads the SWAC in sacks, ranks 4th in scoring defense, and 3rd in defensive pass efficiency. Much of the credit for the improvement defensively can be attributed to this being the second season in defensive coordinator Ralph Street’s 4-2-5 defense, a more experienced secondary, the benefit of spring practice and the addition of Baylor transfer defensive back Terrence Singleton, and a more productive front seven.

3. DeVohn Reed continues to make a case for SWAC Defensive Player of the Year

One of the key playmakers on the Panther defense, DeVohn Reed continues to blossom as one of the more dominant defensive players in the SWAC. Entering his redshirt junior season, Reed was already a two-time all-conference performer, and judging his performance in the first half of this season, it is a mere formality that he will be selected to his third consecutive All-SWAC team. The Houston Alief Elsik product has undeniably been a force up front for the PVAMU defense, as Reed currently leads all Panthers in sacks with 6.5. He’s also been extremely active in run support, tallying seven tackles behind the line of scrimmage for a loss of 45 yards. Reed is on pace to have double-digit sack totals for the first time in his college career. In order for the Panthers to catapult themselves back in the picture for the SWAC West division crown, Reed, along with the rest of the Prairie View front four, will be pivotal in containing playmakers Lenard Tillery and Austin Howard from Southern, and Jackson State signal caller LaMontiez Ivy.