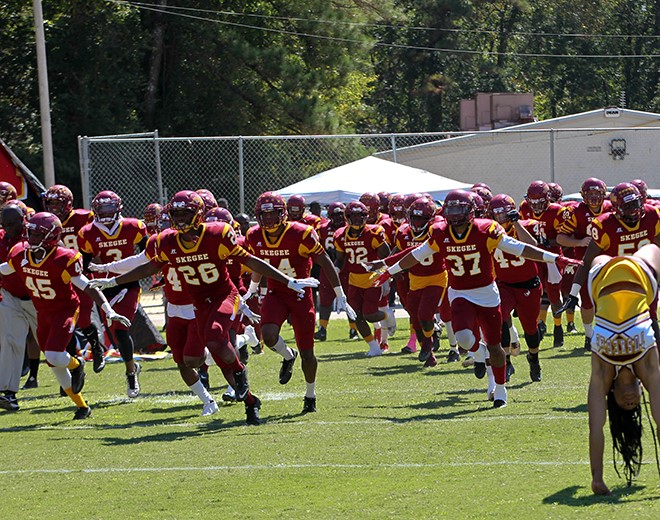 COLUMBUS, Ga. – Needing a spark after a sluggish first half, the eighth-ranked Golden Tigers of Tuskegee University turned to the passing game in the second half en route to a 28-19 victory Morehouse College in the 81st annual Tuskegee-Morehouse Classic at AJ McClung Stadium Saturday afternoon.

With two of the best rushing defenses in the country battling in the trenches Saturday afternoon, combing to give up just 68 yards on 64 carries, senior Kevin Lacey finished the day throwing for 300 yards on 18-of-29 passing with four touchdown passes. He was also named the offensive most valuable player in the game as voted on by the media members in attendance.

While Lacey was throwing the ball around the Morehouse defense, the Golden Tigers rushing game was in held in check with just 35 yards on 40 carries and was led by Kenny Gant with 27 yards on eight carries.

However, the Golden Tiger defense was not to be outdone on the day as they held Morehouse to just 33 yards on 24 carries running the football and just 176 total yards of offense. The Golden Tigers forced three turnovers and sacked Morehouse quarterback Monqavious Johnson four times on the afternoon. [easyazon_infoblock align=”right” cart=”y” identifier=”B01KKXKA9M” locale=”US” tag=”hbcusports-20″]

Tuskegee (6-0, 4-0 SIAC, 1-0 SIAC West) was the only team to score in the first half as the teams struggled to move the ball against their opponent due to the defensive effort and the wind affecting the passing game. The Golden Tigers got on the scoreboard first with a 16-yard pass from Lacey to tight end Leo Gilbert with 8:10 remaining in the open half. The drive lasted eight plays and covered 75 yards, using 4:42 on the clock and the score stayed that way at halftime.

The Golden Tigers took a two-touchdown lead with 7:42 to play in the third quarter when Lacey threw his second touchdown of the game. This time he hooked up with Desmond Reece at the 50, and the senior weaved his way the final 50 yards and avoided five tackles en route to the touchdown. The drive covered just three plays and 62 yards, using 1:42 and gave Tuskegee a 14-0 lead.

And that is where things got interesting.

Morehouse (2-4, 1-2 SIAC, 0-1 SIAC East) got on the scoreboard for the first time with a nine-yard run by Johnson with 5:48 to play, using just 1:46 to pull within a field goal. The Maroon Tigers scored just 16 seconds later to pull within a point when their defensive front got into the backfield and forced a fumble, scooped up by David Smith for a 28-yard return with 5:32 to play in the quarter.

However, Tuskegee wasted little time in getting back on the scoreboard, scoring on their next possession just 2:03 later. Lacey dropped back and zipped a pass to the right sideline to a streaking Dekendrick Moncrief and he did the rest, racing to the end zone for a 50-yard touchdown – the first of his career – and gave Tuskegee a 21-13 lead.

After a seven-point first half, the two teams combined to score 33 points and Morehouse closed out the scoring in the quarter with another defensive effort. The Maroon Tigers were able to fall on the ball in the end zone on another mishandled exchange when Lynd Parrish scored as time ran out. Morehouse missed the two-point conversion, and trailed by just two points heading to the fourth quarter.

Morehouse continued the momentum into the fourth quarter as the short kickoff was mishandled by Tuskegee, and Morehouse was able to gain possession at their 48-yard line.

However, they could not capitalize, as the Golden Tiger defense came up big on the second play from scrimmage when Darnell Hill picked off his second pass of the season. But he didn’t stop there, as the sophomore weaved his way down to the nine-yard line and set up the Golden Tigers in great field position.

And it didn’t take long for Tuskegee to take advantage of the opportunity.

Lacey dropped back to pass and lofted the ball up to sophomore receiver Javarrius Cheatham in the back of the end zone. The sophomore was able to high-point the football over the smaller Morehouse defensive back, giving Tuskegee a 28-19 lead with the eight-yard touchdown with 13:47 to play in the game.

Although all the scoring was done, the excitement of the game was not.

Morehouse, trailing by nine, drove down the field on Tuskegee but were stymied inside the red zone and were forced to kick a field goal. However, the field goal didn’t get very far as senior Julian Morgan burst through the line and blocked the kick – a 29-yard attempt – and was recovered by Tuskegee around midfield. The block was the second of the game for the Golden Tigers.

The Maroon Tigers were again turned back by the Golden Tigers defense with just 1:48 remaining in the game when sophomore safety Jonah McCutcheon intercepted his first pass of the season, all but ending the threat.

Defensively, Osband Thompson finished with a team-high 10 tackles, including seven solo tackles. He added a pass break-up which was a near pick-six and a blocked field goal. Marlon Parnell and Devonta Ramseur each finished with five tackles each, while the team combined for four sacks. Senior Vladimir Gray finished with 1.5 sacks in the win for Tuskegee.

The Golden Tigers will have a week off next week before they will face three consecutive SIAC West Division opponents, beginning October 22 against Kentucky State for homecoming.