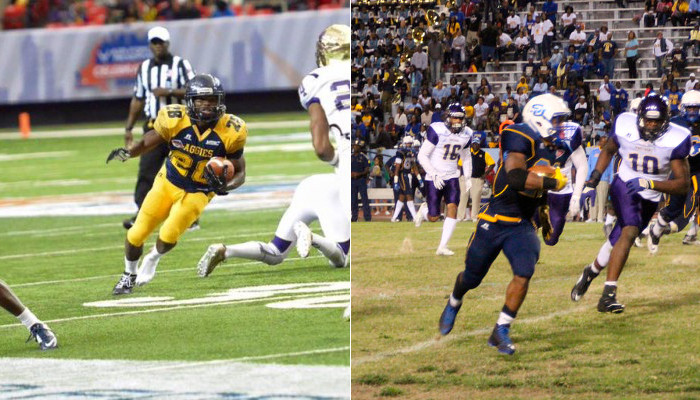 The two best running backs in HBCU football have chased history with every carry this season.

For North Carolina A&T’s Tarik Cohen and Southern’s Lenard Tillery, that chase might be over sooner rather than later.

According to MEAC statistics, Cohen entered the season only one of six MEAC players with 4,000-plus career rushing yards. Cohen is 427 yards shy of catching the MEAC’s career rushing leader — South Carolina State’s William Ford. Ford rushed for 4,672 yards in his career (2006-09).

Cohen currently third in the MEAC in rushing, gaining 214 yards on 36 carries through three games this season.

The next name on the MEAC list for Cohen is former Hampton standout Alonzo Coleman. Coleman finished second all-time among MEAC running backs, rushing for 4,648 yards in his Pirate career (2003-06).

Tillery now sits 375 yards away from tying Jackson State’s Destry Wright for the SWAC’s career-rushing mark. Wright (1997-99) ran for a SWAC-best 4,050 yards, with Tillery vying to catch him and become just the second SWAC running back since 1970 to rush for 4,000-plus yards in his career.

The next name on the list for Tillery is Alabama State’s Brad Baxter, whose 3,732 yards is fifth-best in SWAC history. However, Tillery is 57 yards from passing Baxter.

Tillery is currently third in the Football Championship Subdivision in rushing, leading the SWAC with 503 yards on 78 carries through four games this season.

Special Contributor to HBCU Sports and a graduate of Southern University.