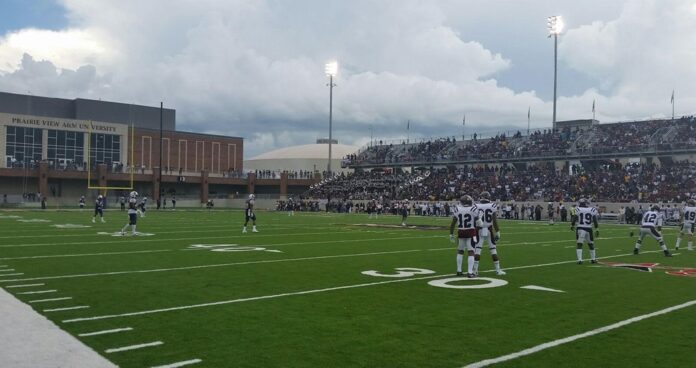 It wasn’t easy, but rivalry games seldom are.

Throw in a pair of weather delays on the occasion of the grand opening of the new Panther Stadium, and with an inspired opponent looking to play spoiler, the plot thickened.

Trailing 25-22 with just under nine minutes remaining, the Panthers marched 78 yards in only six plays to take the lead for good. Trey Green threw a 39-yard touchdown pass to Khadarel Hodge to put the Panthers ahead to stay with just over seven minutes to play in the season and Southwestern Athletic Conference opener for both teams.

It was the second of two Green-to-Hodge scoring passes in the second half in which Prairie View (1-0 overall, 1-0 SWAC) outscored Texas Southern 23-8.

The defense swung momentum for the Panthers in the third quarter with a pair of takeaways and a safety. A fumble recovery by Jalan Coleman at the Tigers’ 9-yard line let to the first of the two touchdown passes.

On the next possession, a bad snap led to Damond Jackson safety to cut the deficit to 17-15.

A forced fumble by Will Skinner was recovered by Jamespaul Bryant at the 32. Eight plays later, Green scampered in from a yard out to put the Panthers back in front, 22-17.

Weather delayed the start of the game by nearly an hour, with the second delay of more than an hour occurring with less than a minute to play in the first quarter.

The Panthers return to action Saturday at 11 a.m. at Texas A&M in a game that will be televised on SEC Network Alternate Channel.