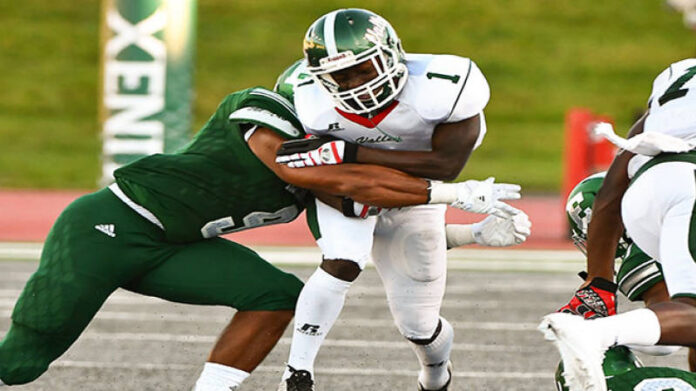 Austin Bray got the start at quarterback for the Delta Devils and finished the evening completing 19 of his 36 passes for 146 yards and two touchdowns.


MVSU only generated 169 yards of total offense including 23 rushing and gave up 479 yards to EMU.

Todd Porter threw for 171 yards and three touchdowns to lead EMU Shaq Vann ran for 156 yards on 20 carries, including a pair of touchdowns,Ian Eriksen also ran in two touchdowns and Blake Banham had one. Hauling in Porter’s TD passes were Nigel Kilby, Antoine Porter and Lavonte Robinsonas

EMU took a 28-0 advantage into the break, then scored on every possession in the second half, including a safety that marked the team’s first since the 2005 season.

MVSU avoided a shutout with a pair of touchdowns in the fourth quarter, including a 13-yard TD strike from Austin Bray to Joshua Banks.