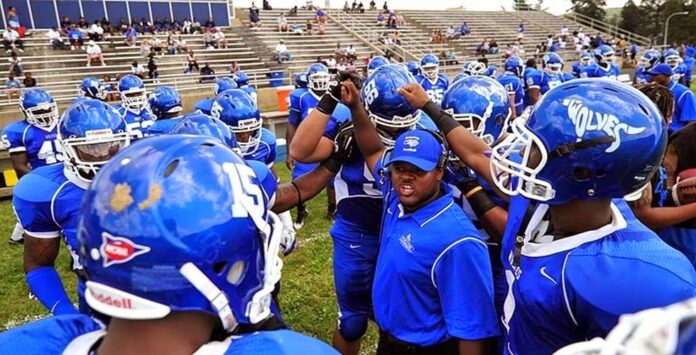 LINCOLN, Pa. – Jr. QB Domincik Trautz connected on a nine-yard touchdown pass to Jr. Marcus Lyles in the first overtime, and Jr. Brendyn Van Demark converted the score to give Cheyney University a seven-point lead. The game was then in hands of a defense that dominated through most of the game, and when Marvin Easter III knocked down a pass in the endzone on a two-point conversion, the Cheyney Wolves ended a 43-game winless drought with a 21-20 victory in overtime in the “Battle of the First” at The Lincoln University Thursday night.

The Wolves held a 21-14 lead in the first overtime when Lincoln quarterback Khari Nquzi connected on a nine-yard td pass to Larquise Hobbs, on fourth and goal from the 9, to extend the game for one more play. With an injured place-kicker, the Lions, who did not attempt a kick during the game, went for the win on the two point-conversion, but Easter III broke up the pass and CU players and fans stormed the field in celebration.

The Wolves got off to a fast start, after forcing a three and out from Lincoln on the opening possession of the game, Cheyney was able to begin its opening drive of the season at the Lions 34 yard line following an 8-yard punt. The Wolves took just six plays to take advantage of the field position and put up the first score of the season on a 6-yard dash to the corner from Brandon French.

Cheyney forced another punt and looked poised to extend it lead, when it marched deep into Lions territory, but the Wolves, could not convert a fourth and five at the Lincoln 20, and turned the ball over on downs.

Once again the defense stepped up and forced a quick punt. With a drive start at the Lincoln 42, the Wolves faced a third and two at the Lions 34 when R-Fr. James Madlock III, who led Cheyney with 92 yards rushing on 15 carries, electrified the crowd with a dazzling tackle-breaking, ankle-breaking run to put the Wolves ahead 14-0 and what looked like on their way to an easy victory.

The Lions had other thoughts, a 59-yard punt return set up Lincoln at the Cheyney 15 and three plays later All-CIAA running back Stephen Scott went in from the two. The Wolves, All-PSAC defensive end Joseph Bryant then stopped Scott on the two-point rush to keep it at a 14-6 Cheyney advantage..

Nzquzi then rumbled in from six-yards out, on the final play of the first half, and converted the two-point-attempt with a completion to Andre Price and the game was tied at 14-14 at the break.

Despite having the ball for over eight minutes on a 16-play opening drive, and for all but six plays in the third quarter, the Wolves could not put any points on the board and the contest remained deadlocked late into the fourth quarter.

It appeared that Cheyney was destined to fall in heart breaking fashion when William Reyes grabbed his second interception of the game off a tipped pass and was heading down the sideline for what looked like the deciding score, but great hustle by the Wolves and a penalty on the Lions gave Lincoln the ball at the Cheyney 29- yard line with 1:11 to play.

Lincoln converted a third and short to move the ball inside the Cheyney 20, but a bad snap on first down set the Lions back and led to overtime.

The Wolves had the first opportunity from the 25, but could not move the ball on the first three plays and face a fourth and 10 from the 25, when Trautz was able to find a seam in the Lions defense and scramble for twelve yards and a first down. Three plays later he put the Wolves ahead to stay with the TD pass to Lyles.

Madlock III rushed for a team-best 92 yards and a score on just 15 carries for a 6.1 yards per carry average, French powered his way to 73 yards and a score, Lyles led the receiving core with four catches for 48 yards and the winning TD reception, Nigel Wiley added 44 yards on three catches and Trautz threw for 108 yard,s a score and 2 int’s.

Scott led all runners with 108 yards, but it took him 31 carries, he also had a team-high 48 yards on four reception.

Brendyn Van Demark was three-for-three on the all-important extra points in the contest.

The Wolves are next in action at O’Shields-Stevenson Stadium for the home opener on Saturday, September 10 for a 1:00 PM kick-off against PSAC West opponent California (Pa).