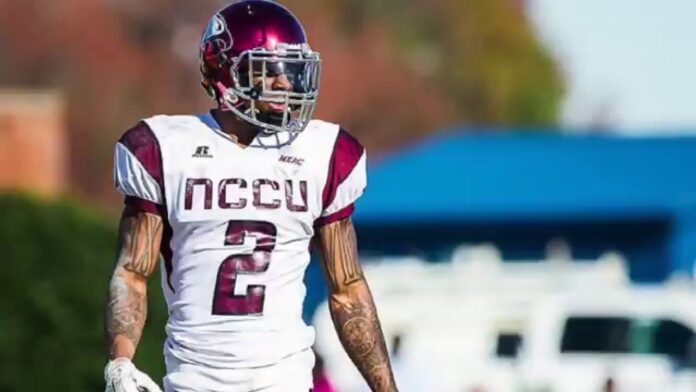 Smith becomes NCCU’s second NFL draft pick in the last 25 years. Smith and defensive end Greg Peterson, who was also chosen by Tampa Bay in the fifth round of the 2007 NFL Draft, are the only Eagles selected in the draft since defensive back Robert Massey went in the second round to the Saints in 1989.


Prior to his announcement, Smith received multiple calls from NFL teams while at his home in Upper Marlboro, Maryland on Saturday, but then came the call that changed his life from a representative of the Buccaneers. “‘Ryan, we are going to make you a Buc,'” Smith remembers the caller saying. “My heart dropped. It’s amazing.”

During Smith’s visit to Tampa, Florida prior to the draft, he was impressed, saying “I can see myself playing here for these coaches.” Then Smith added, “They have the best facilities I have ever seen.”

He said the Buccaneers “like my quickness, my burst and my attitude on the field.”

As far as what Buccaneers fans should expect from Smith, he said “I have a chip on my shoulder. I have been doubted my whole life. I am going to give it my all and 10 times more. All my life I’ve been doubted. All my life I’ve had to work hard and prove myself. There’s nothing new here. I still have something to prove. They are going to see why I should have gone earlier in this draft.”

Smith is looking forward to the opportunity to learn in the NFL. “I know there’s a lot to learn. I know I’m raw and I’m nowhere near my best ability,” he said. “I want to see how great I can be.”

Mark Dulgerian of the NFL Network provided this analysis of Smith: “One of Tampa’s biggest needs was cornerback and they’ve addressed it again with one of the ‘sleepers’ in this draft. Smith is a quicker-than-fast cover corner with flashy ball skills. With some of their current CBs nearing contract years, Smith has long-term starting potential.”

Smith is slated to leave Maryland for Florida on Thursday as his NFL journey continues.

Smith capped his standout NCCU tenure from 2012-15 with a school career record 168 solo tackles, while finishing sixth in career tackles with 263 and 11th in passes defended with 31 (seven interceptions and 24 pass break-ups).

As a senior, he ranked third in MEAC with team-best 11 passes defended (two interceptions and nine pass break-ups), while adding 52 tackles (38 solo). Smith also led conference and ranked 10th in the nation with an average of 28.1 yards per kickoff return (14 for 394 yards, 1 TD).

After helping to lead the Eagles to their second straight Mid-Eastern Athletic Conference championship, Smith graduated from NCCU on Dec. 12, 2015, with a degree in criminal justice.