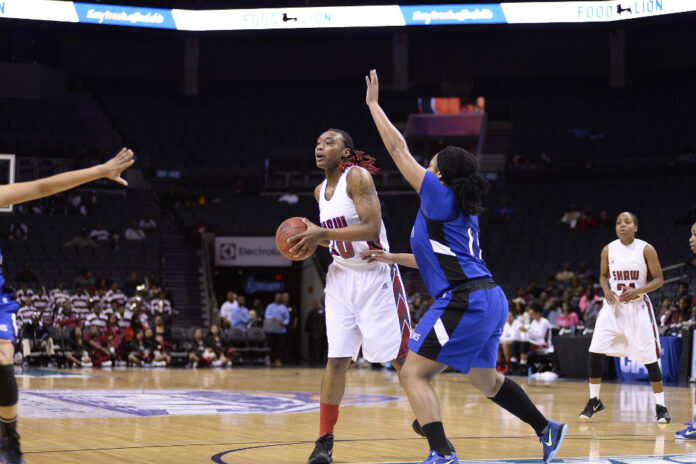 RICHMOND, Va. – The Shaw University women’s basketball team saw their 2015-2016 season come to an end with an 85-70 loss to West Liberty University in the first round of the NCAA Atlantic Region Tournament in Barco-Steven Hall on Friday afternoon.

Liz Flowers led all scorers in the contest with 40 points and five rebounds, while Jasmin Kiley contributed 12 points and Kailee Howe notched 11 points and a game-high 12 assists for the Hilltoppers.

For the contest, Shaw outscored WL 40-20 in the paint, 24-17 in points off of turnovers and held an 18-11 advantage in second chances. The Lady Bears’ bench also outscored the Hilltoppers 24-12 but the WL had 10 fast breaks compared to Shaw’s eight.

Sophomore Laquisha Taylor (Charlotte, NC) scored the game’s first basket with a layup from Ross to give Shaw the early 2-0 lead but West Liberty quickly responded with a layup of their own from Kierra Simpson with 9:06 on the clock.

Tied at 5-5, a 3-pointer by Flowers would give the Hilltoppers the lead for the remainder of the first quarter as Shaw got within one point twice before WL drained four-straight 3-pointers to orchestrate a 12-6 run to lead 24-17 going into the second quarter.

The Hilltoppers opened up the second stanza with a 9-0 run before junior Aaliyah Mercer (Bronx, NY) snapped the Lady Bears scoring drought with a 3-point play at the 6:32 mark. Offensively, Shaw struggled to find rhythm as WL mounted its largest lead of the half at 17-points after Kiley drained a 3-pointer with 1:20 left in the first half.

In the final minute of the second quarter, Wright scored the last point for Shaw as the Lady Bears trailed 48-35 to WL at intermission.

The Hilltoppers kept the contest in reaching distance for the Lady Bears in the third quarter but WL used a 12-6 run to lead 60-42 at the 3:58 mark. Shaw scored five unanswered points before a layup by Simpson sparked another run for WL that would give them a 19-point (70-51) advantage going into the final quarter of the game.

Facing a 22-point deficit in the final stanza, Shaw carved the Hilltoppers lead possession by possession to trail by 11 points with 2:09 as Bryann Guyton (Richfield, MN) sinked two free-throws. However, a 3-pointer from Kiley extended the Hilltoppers lead to 14-points as the Lady Bears would not be able to overcome the double-digit deficit going forward to fall 85-70 in the contest.