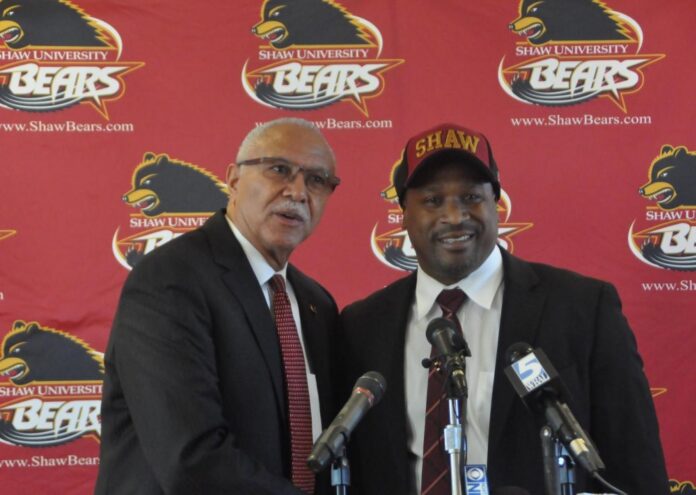 Jones joins Shaw athletics with impressive credentials in the football coaching ranks. He comes to Shaw from North Carolina Central University where he was the assistant coach and running backs coach for the Eagles.

During his two stints at NC Central, Jones worked with defensive backs and outside linebackers. Under his leadership the Eagles garnered two CIAA championships in 2005 and 2006. His players were also a part of the 2006 black college national championship squad.

In his seventh season as the head coach at Southern High, Jones led the Spartans to the state title following the team’s seventh straight playoff appearance under his supervision. With a Big 8 Conference championship also part of the team’s historic run, Jones was selected as the 2013 Big 8 Conference Coach of the Year. He was also the PAC-6 Coach of the Year three times after charging the Spartans to three consecutive PAC-6 championships from 2007 to 2009.

As a student-athlete at NC Central, Jones earned First Team All-Conference and Second Team All-Region honors twice and remains among the school’s career leaders in passes defended (41) and interceptions (10).

In 1996, Jones earned First-Team All-CIAA and Second Team All-South Region honors as a junior when he collected eight interceptions, placing him second on NCCU’s single-season records list. He was voted as the NCAA Division II Player of the Week after tying a school record with three interceptions in a game against Elizabeth City State University. That year, the Eagles boasted the No. 1 pass defense in the nation.

Jones was again selected First-Team All-CIAA and Second Team All-South Region in 1997 after leading the conference with an 11.0-yard punt return average and a 29.5-yard kickoff return average. Jones broke a 52-year-old school record when he returned a punt 80 yards for a touchdown against Fayetteville State University, the longest punt return in school history at the time. He graduated from NC Central with a bachelor’s degree in recreational therapy in 2001.

Jones went on to play arena football with the Carolina Cobras in 2001 and 2003, the Augusta Stallions in 2002, and the Greensboro Prowlers in 2000. He also served as defensive coordinator with the South Georgia Wildcats of the AFL2, leading his squad to the No. 1-ranked red-zone defense in the league.

Jones is married to Dr. Kamala Uzzell Jones. He has a daughter, Jayla.

The Shaw Bears will begin their 2016 season with a home opener against Limestone College on Sept. 3 at Durham County Memorial Stadium. Kick-off is slated for 1 p.m.