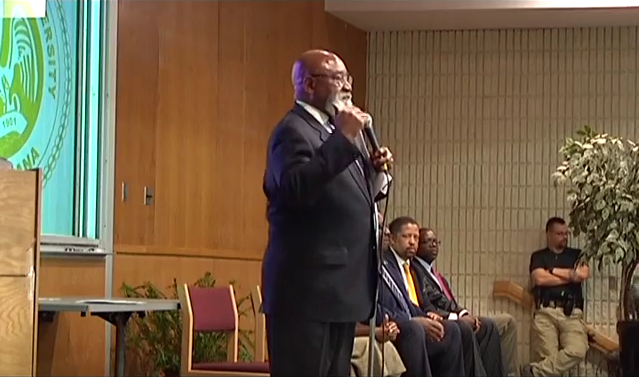 While addressing questions from students during a meeting last week regarding proposed budget cuts at Grambling State to the tune of $2.5 million, Dr. Willie Larkin, the school’s president addressed one question in particular about the school’s decision not to sign an apparel deal with sportswear manufacturer, Adidas.

“All of the SWAC schools are in a contract with Russell [Athletics] through 2018,” Larkin said to the audience. “Now, if we walk away from that contract, we will wind up being fined $2,500 for the first offense. Second offense, $10,000. The third offense, per sport, $25,000. And that’s just from Russell, not to include the fines that would be levied by the SWAC commissioner [Duer Sharp].” [easyazon_infoblock align=”right” cart=”y” identifier=”B008ZZORE2″ locale=”US” tag=”hbcusports-20″]

Larkin provided examples of what could be considered offenses to the existing contracts the school has with Russell Athletic and Nike in conjunction with the SWAC and other member schools.

“If Russell decides to exercise levy and fines against us, we could wind up paying several million dollars,” Larkin added in addressing the financial impact the fines could have on the school during the existing contract.

Larkin told the students he’s aware of how “sexy” it is to want to change apparel companies, but reminded them of the “brand hit” the school suffered when the football team refused to play Jackson State during the 2013 season.

“We can’t go around as a university and just decide we’re going to break contracts anytime we want to,” Larkin said.

In an email sent to HBCU Sports in January, GSU interim AD Obadiah Simmons confirmed that an athletic apparel proposal from Adidas was presented to the school, but no decision had been made at the time.