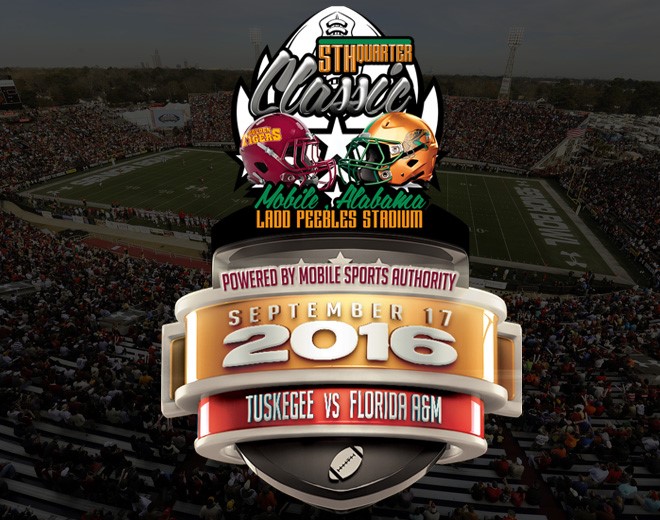 MOBILE, Ala. – The Mobile Sports Authority (MSA) and Promoter, Robert Buck, are proud to announce that after a 20-year break, Mobile will be the host for the revival of a college football rivalry which dates back over 100 years. It was announced today, Mobile will be the host of the inaugural 5th Quarter Classic Powered by the Mobile Sports Authority.

This college football game will feature the Florida A&M University Rattlers hosting the Tuskegee University Golden Tigers on September 17, 2016 at historic Ladd-Peebles Stadium in Mobile. With the Rattlers holding a 27-15-2 advantage in the series, Florida A&M and Tuskegee have had a rivalry that dates back to 1908. In 1996, due to a conference change, the schools ended their 44-game rivalry. With today’s announcement, the Mobile Sports Authority (MSA) along with Promoter, Robert Buck, announced that this 20-year hiatus will be awakened with the 2016 5th Quarter Classic Powered by the Mobile Sports Authority.


Kick-off is scheduled for 6 PM at Ladd-Peebles Stadium on week three of the season. Ticket information will be forthcoming.

“This year, an old foe will return after a 20-year absence from competing against us. We look forward to facing the Golden Tigers of Tuskegee University in Mobile, Ala. on Sept. 17.” said Milton Overton, Athletic Director of the Florida A&M Rattlers. “The revitalization of one of FAMU’s traditional foes dates back to the first meeting in 1908. We listened to our constituents, including alumni, students, faculty, staff, and friends of FAMU. This game will provide an opportunity for Rattler and Golden Tiger fans to enjoy the action and the spirit on and off the field with the addition of the Battle of the Bands.”

This will be the first “Classic-style” football game to be played in Mobile since 2009. The Gulf Coast Classic was played in Mobile for 35 years from 1974-2009 with Alabama State being the home team every year. However, that game was discontinued after the 2009 Classic.

Tuskegee University Athletic Director, Curtis Campbell added, “”We are excited about the opportunity to compete against Florida A&M University in the 5th Quarter Classic. The history between TU and FAMU goes back many years, and has left its mark on HBCU football as they are two of the winningest programs in football. This is an opportunity for our alumni and new generation of Tuskegee Golden Tiger football fans to be involved in such a historic game. We look forward to the game being played in Mobile this year and seeing all our alumni and fans at the game.”

The Mobile Sports Authority began discussions to bring a Classic-style football game back to Mobile, Ala. in early 2014.

Knowing that Mobile, in all its rich history, would be a perfect backdrop for this long-standing historical competition, the MSA and Promoter, Robert Buck, are proud to be reviving this competition in an all-out “Classic-style” experience on a neutral playing field for both teams.

“I am proud to announce the return of an HBCU Classic to Mobile, Alabama. It has been a pleasure to establish the 5th Quarter Classic for the Gulf Coast community. Florida A&M University and Tuskegee University are elite institutions with outstanding athletic programs, excellent marching bands, and awesome fans. We are honored to feature both as participants in 2016” said 5th Quarter Classic Promotor, Robert Buck. “The Mobile Sports Authority and I are working together to make the entire weekend an eventful experience for fans. 5thQuarterClassic.com is the best source to learn future plans for the weekend.”

Danny Corte, Executive Director of the Mobile Sports Authority added, “One of the events which we at the Mobile Sports Authority thought was missing on our annual Mobile sports calendar was a “Classic-style” college football game. It’s been almost 7 years (2009) since the last Classic was played here. So, several years ago, we started working to create another Classic game for Mobile. We’re very proud to have two traditional teams, that being Florida A&M and Tuskegee, playing in Mobile this fall. We’re looking forward to welcoming the teams, officials, and fans for both teams to Mobile in September. The job of the Mobile Sports Authority is to bring quality sporting events to the Mobile County area. We’re proud that we’ve had a good deal of success in recent years, but it’s really due to a team effort with support from both Mobile County and the City of Mobile.”