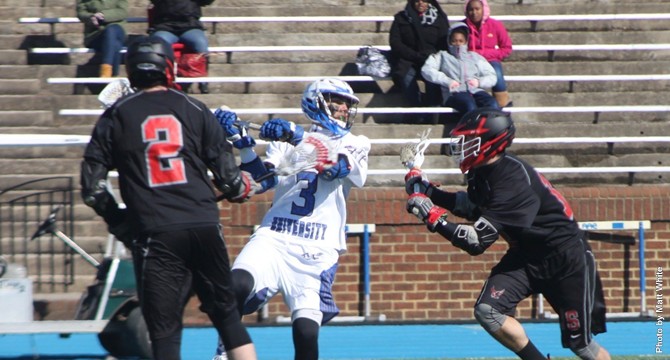 HAMPTON, Va. – Kendall Sapp scored two goals and had an assist, while Brock Robinson scored once for Hampton University on Saturday, as the Pirates fell 20-3 to visiting Roberts Wesleyan College at Armstrong Stadium.

But the result was almost secondary in what was a historic day.

For the first time since 1981, when head coach Lloyd Carter played at Morgan State, a Historically Black College and University (HBCU) fielded a varsity men’s lacrosse team — and Saturday’s game marked the first time ever on the NCAA Div. I level.

Dom Cianfarino scored six goals for Roberts Wesleyan (1-0), while Matt Benedict had a goal and six assists with three others had two goals each. Cianfarino scored five of his goals in a first period that saw the Redhawks soar to a 10-0 lead.

Robinson scored the first goal in Pirates history 58 seconds into the second 15-minute period, as he took a feed from Sapp and blasted one from the left side. Sapp then closed the scoring in the second period picking up a loose ball and putting it past goalkeeper Keith Keehn to make the halftime margin 15-2.

Sapp repeated his goal to close out the scoring in the contest with 4:42 left in the game. He finished with two goals and an assist on three shots. Alex Hudson took a team-high four shots for the Pirates.

Alyn Jordan-Bass made eight saves for the Pirates.

The Pirates will be on the road for their next varsity game to take on Thiel College on Saturday, Feb. 27 in Greenville, Pa. at 2 p.m.