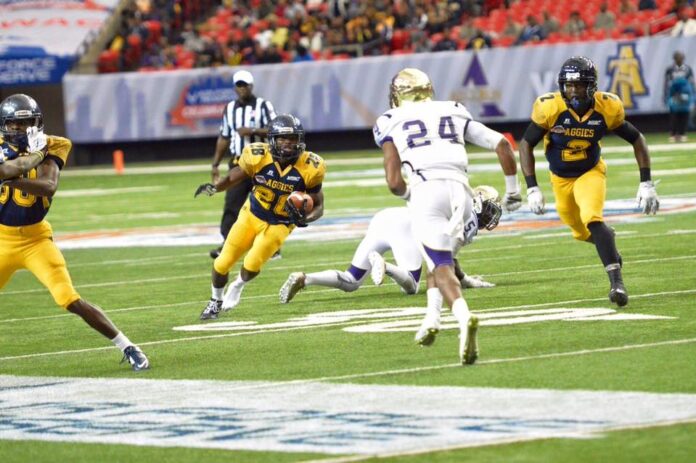 Instead, the junior running back feasted on the Alcorn State defense for a school-record 295 rushing yards and three touchdowns in a 41-34 win in the Air Force Reserve Celebration Bowl at the Georgia Dome.

Alcorn State (9-4) cut the deficit to 24-13 by halftime before eventually tying the game early in the fourth quarter on a Tollette George 11-yard touchdown reception from quarterback Lenorris Footman.

Footman was 14 for 36 for 144 yards and two TD passes. He also caught a 9-yard pass from George in the third quarter.

The game then became a back-and-forth battle until Cohen, who was named the Celebration Bowl Offensive MVP, provided the tie-breaking score with a 73-yard touchdown run with 4:17 left in regulation.

“We’ve said all along that Tarik is special,” North Carolina A&T coach Rod Broadway said. “The nation got to see him perform today. He had a big game for us, and we needed it.”

After a taking over at midfield following a North Carolina A&T punt, Alcorn State drove to the N.C. A&T 9-yard line but the Aggies stopped the Braves to secure the bowl win.

“I thought we were going to win with that last drive,” Braves coach Jay Hopson said. “This has been a football team you can never count out. It doesn’t matter if we’re down 40-to-nothing, we seem to find a way with three minutes to go in the game to give ourselves a chance to win.”