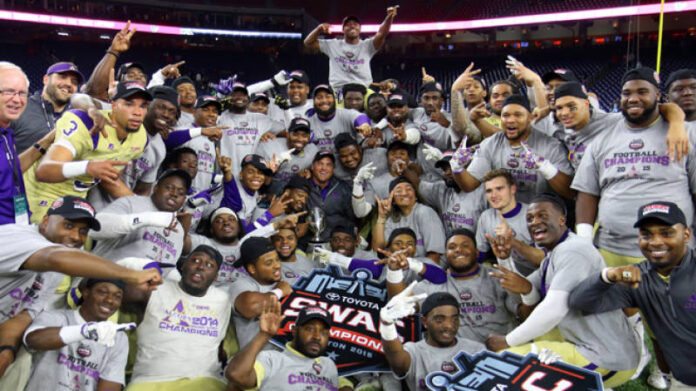 HOUSTON — On his first carry of the SWAC championship game, Alcorn State senior running back Darryan Ragsdale raced through a large gap created by Braves offensive line and was in the secondary.

As a Grambling State defender approached, Ragsdale lowered his shoulder and exploded through the attempted tackle and sprinted 57 yards before he was caught at the Grambling 16 yard line.

The run was an indication that the Braves would be the aggressor, as the offense piled up 411 rushing yards and forced five turnovers on defense en route to a 49-21 win and a second consecutive conference championship at NRG Stadium.

ASU (9-3) is the second school to win back-to-back SWAC championship since Grambling State won three straight from 2000-2002.”These are great moments when you’re able to win championships,” Alcorn State coach Jay Hopson said. ”I’m just proud and blessed to be a part of this journey and to be around these young men. It’s truly been the greatest blessing of my life. Just humbled and appreciate everyone that’s associated with our program. Great win today.”

”We have a good team,” Ragsdale said. ‘‘I knew coming into this game we were all on the same page and we knew everyone had one mindset. We just accomplished that.”

After both teams traded punts to open the game, the defending champions struck first as a 84-yard sprint to paydirt by Ragsdale to help the Braves jump out to a 7-0 lead.

With the run – his third attempt of the game – Ragsdale broke the SWAC championship game record for most rushing yards as well as the longest rush in the game’s history.

Ragsdale ended the day with 15 carries for 188 yards.

The ensuing Tigers’ drive ended in two plays, thanks to a 24-yard pick-six by Alcorn State cornerback and SWAC championship game Defensive MVP Warren Gatewood that lifted the Braves a 14-0 lead in the first quarter.

Grambling State responded on its possession, when an Alcorn State roughing the passer penalty helped to sustain a drive that ended with a 14-yard touchdown run by Johnathan Williams on the first snap of the second quarter.

The Braves responded with a six-play, 72-yard drive that Lenorris Footman capped with an 11-yard scoring toss to SWAC Newcomer of the Year Marquis Warford.

Grambling State returned serve as Williams dropped in a 24-yard scoring toss to Verlan Hunter to punctuate an eight-play, 96-yard march with 9:14 left in the second quarter.

Alcorn State used some trickery to jumpstart its next scoring drive, as a 33-yard rush by Warford on a jet sweep reverse put the Braves in GSU territory. The Footman-to-Warford connection took care of the rest with a 28-yard score with 2:32 left in the half to put the Braves ahead 28-14.

The teams traded turnovers in the third quarter, when a fumble by Grambling’s Martez Carter was scooped up by Alcorn State’s Eric Foster, who returned it to the GSU 16-yard line. However, a holding penalty wiped out a Ragsdale score and on the next play, Grambling State’s Troy Roach forced a fumble that was recovered by Derwyn Butler to stave off a potential score.

The Tigers’ following drive ended when Gatewood picked off his second pass of the evening, but the Braves couldn’t take advantage of it. On the ensuing punt, a muffed catch was pounced on by Alcorn State, setting the Braves up at GSU’s 28 yard line. Seven plays later, the Braves cashed in thanks to a 9-yard touchdown scamper by Footman that put them ahead 35-14 with 2:31 left in the quarter.

Alcorn State added to its lead with a five-yard pitch and catch from Footman to Corbin Johnson.

Grambling State responded with a touchdown with 7:53 left in the game with a 1-yard plunge by Jestin Kelly, and Alcorn State put up the final score of the night with 4:03 remaining on a 37-yard touchdown run by Warford, who scored three times in the game and accounted for 200 all-purpose yards, third-most in SWAC championship game history.

”It’s no secret what happened tonight,” Grambling State coach Broderick Fobbs said. ”Alcorn State did a really good job, they had a good plan. Jay Hopson – my hats off to him, his staff and players. Definitely worthy of repeating. I thought they did a tremendous job of taking advantage of some mistakes we made.”

Gatewood picked off three passes, which tied the SWAC Championship Game record for most interceptions. Footman threw for 202 yards on 15-of-24 passing and three scores. He also rushed for 101 yards and another score.

Williams was held in check to the tune of 225 yards on 19-of-38 passing. He also rushed for 34 yards to lead the Tigers. Chester Rogers caught seven passes for 61 yards, and Guy Stallworth made 15 tackles, one shy of the SWAC championship game record.

“It’s more about Alcorn, just to give these guys a championship … it’s not so much about (getting revenge against) Grambling. Those guys are so talented over there. … It’s more gratifying for us as a team,” Gatewood told the Clarion Ledger. “We’re so tight. That’s definitely the most gratifying feeling (about this win).”

SWAC.org contributed to this report