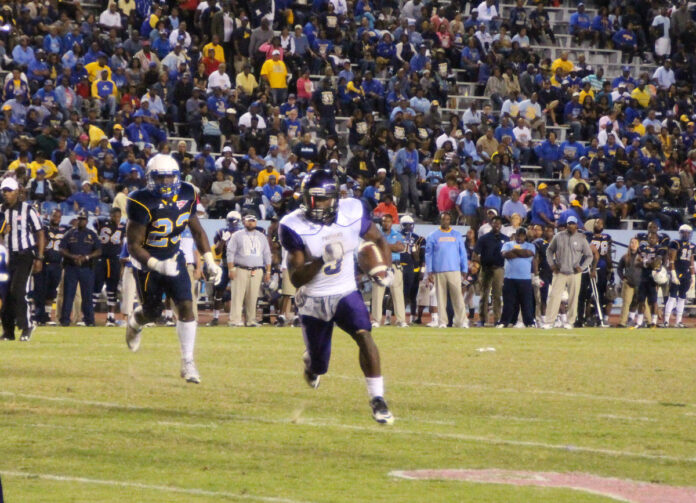 Prairie View A&M football is entering uncharted waters as the team aspires to earn an at-large bid to the 2015 FCS Playoffs. With one more regular season game remaining, versus Jackson State this Saturday, a win would give the Panthers their ninth victory and a strong case for the FCS Playoff Committee to consider. Due to the formation of the SWAC Championship Game in 1999, the SWAC has not had a representative in the playoffs since 1998.

Prairie View A&M has had a complete turnaround in its first season under new head coach Willie Simmons. The Panthers are currently 7-2 overall and 7-1 in SWAC play with losses to FBS Texas State and SWAC Western Division Champion and nationally ranked Grambling State. PVAMU’s current record of 7-2 is the school’s best mark since the 2009 SWAC Championship team (9-1). The record also marks the program’s first winning season since 2010 as this marks the first time since 1966 that a first-year head coach at PVAMU has achieved a winning record.

Picked to finish third in the SWAC West entering the season, the Panthers have defied expectations and have managed to put together a solid season despite having a new coaching staff, no on-campus stadium, a new starting quarterback and no spring practice. Prairie View A&M opened the season with an emotional conference win over rival Texas Southern but hit a road block a week later as 10 players, including four defensive starters and several offensive starters, had to miss the contest at FBS Texas State after a self-report.

Despite the setback, PVAMU persevered and returned to the winner’s column a week later as they held off Alabama A&M for their second conference win, which set up a showdown versus Grambling State in Dallas at the Cotton Bowl. Playing shorthanded due to injuries in the secondary, which sidelined two starters, the Panthers went toe­-to-toe with the Tigers as special teams proved to be the difference in a disappointing shootout loss.

The Panthers would slowly begin to heal and made the necessary adjustments on both sides of the ball after the loss to Grambling State. Bolstered by the return of cornerbacks Arthur Lockett and Damien Lawry, PVAMU bounced back with a 42-0 shutout win over University of Faith and began a run of six straight wins as they’ve averaged 44.3 points per game. During the run, the Panthers have defeated the past two SWAC Champions in Southern and Alcorn State on the road while also defending their home turf and battling injuries to key starters at times such as linebacker Jalan Coleman, Lawry and leading wide receiver Nick Pitre.

Statistically, senior Johnta’ Hebert has lived up to expectations as he ranks second nationally in all-­‐purpose yardage with 725 rushing yards, 563 receiving yards and 500 kick return yards. Senior defensive back/specialist Nick Brewer is chasing history as he leads the nation in combined blocked kicks with six, while quarterback Trey Green has thrown for nearly 2,500 yards and 20 touchdowns.

Prairie View A&M is only one of two schools in the greater Houston area with a winning record this season as both the Panthers and the University of Houston feature new head coaches who’ve compiled winning records in the first season at their respective schools.