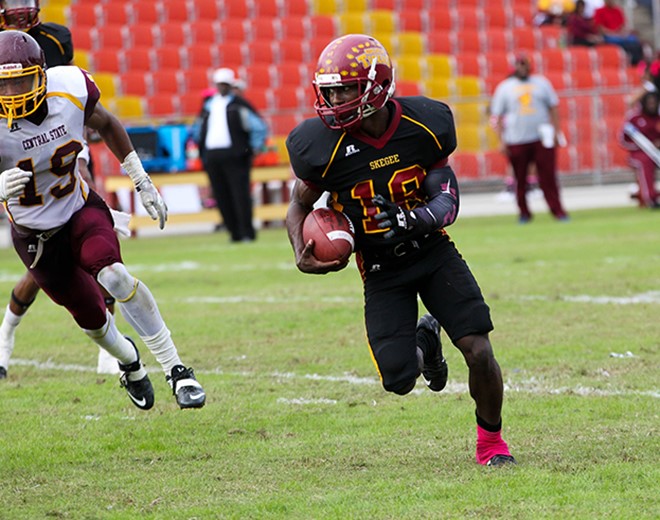 TUSKEGEE, Ala. – The ultimate trap game was set up for the 16th-ranked Tuskegee University Golden Tigers with next week’s match-up with Miles College looming, as Central State University came to town looking to spoil Senior Day.

And for the first 28 minutes it looked as though the trap had been perfectly set up by the visiting Marauders.

However, the trio of linebackers for the Golden Tigers and a senior running back led the Golden Tigers back in the final 32 minutes and as they were able to pull out a hard-fought 19-7 victory over Central State on Saturday afternoon at Cleve L. Abbott Memorial Alumni Stadium.

Trailing 7-6 at halftime, the Golden Tigers had to kick off to Central State to start the second half – a team that is one of the leaders in time of possession in the Southern Intercollegiate Athletic Conference (SIAC). But that is when the momentum shifted, and shifted quickly to the home team.

After electing to bring the kickoff out from six yards deep in their own end zone, Central State found themselves starting a drive from their own 12 to start the second half. After a two short rushing attempts, the Marauders dropped back to pass and found an open Jewell Ratliff – the only problem, Ratliff plays for the Golden Tigers. The senior linebacker, turned receiver on the play and weaved his way through eight players and found the end zone from 20 yards out, giving Tuskegee their first lead of the game at 12-7 just 1:31 into the second half.

After six plays on that drive were rushing plays, Kevin Lacey dropped back to hit a streaking Leo Gilbert down the sideline for a 45-yard touchdown. The score extended the lead to 19-7 with just 1:21 remaining in the third.

Central State dominated the clock in the fourth quarter, as they went on a 23-play drive that totaled 69 yards. The drive used up 10:35 on the clock, but the Marauders came away empty-handed as the Golden Tigers – the second-best red zone defense in the country – held on four plays from the three yard line with 5:46 to play in the contest.

The Tuskegee defense held Central State to just 133 yards of total offense (2.25 yards per play), although the Marauders held the ball for just over 33 minutes in the game on offense.

Senior Travis Hawkins recorded a season-high three catches for 39 yards on Senior Day, while the offense totaled 296 yards on offense in the win.

The stage is set for next week in the West Division, as Tuskegee plays host to Miles College on Homecoming Weekend at Cleve L. Abbott Memorial Alumni Stadium. The winner of the game will advance to the SIAC Championship Game to be played at Cramton Bowl on November 14.