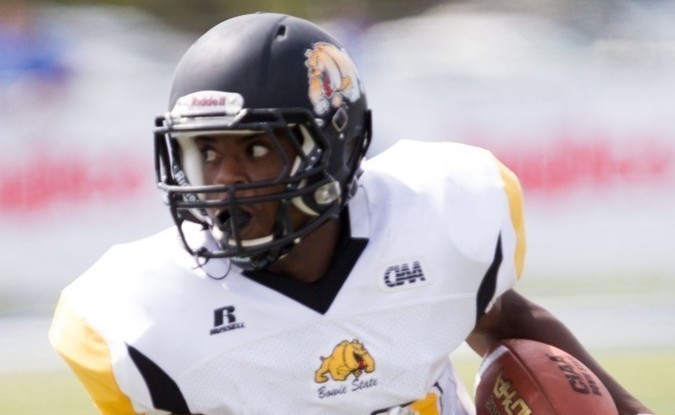 BOWIE, Md. – Bowie State University scored early and often in its home finale, crushing Lincoln University of Pennsylvania 57-3 on Saturday afternoon at Bulldogs Stadium. With the win, Bowie State improves to 8-1 overall, 6-0 in the CIAA and 4-0 in the North while Lincoln (Pa.) dips to 3-6 overall, 1-5 in the league and 0-4 in the North.

Lincoln’s defense had three sacks against Bowie State while the offense produced 253 total yards. Linebackers Rhamir Thomas (Washington, Pa.) and Wadel Louis (Miami, Fla.) combined for one sack, while Tony Jones, Jr. (Baltimore, Md.) and Joseph Webb (Queens, N.Y.) had the other two solo sacks. Thomas and Louis had a game-high ten tackles each Jones pitched in with seven tackles.

The Lions rushed for 188 yards and passed for 65 yards to four different receivers. Emmanuel Saint-Jean (Silver Spring, Md.) and Bradley Martin (Philadelphia, Pa.) had two catches each for 27 and 18 yards respectively.

Bowie State jumped out to a 14-0 advantage after one quarter of play and pushed that lead to 35-0 by halftime. At the end of the first 30 minutes, the Bulldogs outgained the Lions 303 to 168. Bowie State had a pretty balanced attack in the first half, accounting for 161 yards on the ground and 142 yards in the air.

The Bulldogs lead ballooned to 50-0 after three quarters before allowing the Lions their only points of the game.

At the 14:52 mark of the fourth quarter, Lincoln’s Brett Arkelian (Clovis, Calif.) avenged an earlier (37) missed field goal and made a 30-yard field goal for the Lions’ only points of the afternoon.