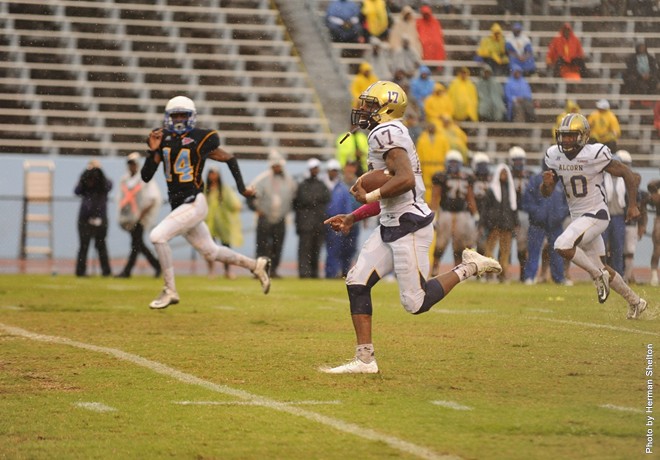 The defending SWAC champion and East Division-leading Braves stung the Jaguars with a 78-yard touchdown run on their first play from scrimmage.

The Braves lost senior quarterback John Gibbs Jr., the SWAC Preseason Offensive Player of the Year who had orchestrated the four previous wins against Southern, to a leg injury after two offensive plays and but didn’t miss a beat.

Sophomore Lenorris Footman checked in at QB and rushed for 274 yards and four touchdowns and tossed two more touchdown passes.

The Jaguars (4-4,4-2) lost its second consecutive home game for the first time in three years. They now trail both Grambling (6-0) and Prairie View (5-1), which holds the head-to-head tiebreaker.

Southern fell behind 21-0 after less than 15 minutes but got within 21-7 at halftime and was threatening to make it a one-score deficit on its first possession of the third quarter.

A 43-yard run by Lenard Tillery, who finished with 132 yards and a touchdown on 26 carries, helped the Jaguars reach the Alcorn 10, but on fourth-and-2 Stacey Garner stopped Tillery for no gain.

That led to a four-touchdown blitz that contributed to Southern’s worst home loss since a 54-7 defeat against Texas Southern in 2010.

The four touchdowns came in a seven-minute span, thanks in part to the Braves forcing two fumbled snaps.

Footman ran 17 yards for a touchdown, passed 38 yards to Brandon Campbell for a score, then raced to the end zone from 30 and 60 yards.

Alcorn, which was minus-7 in turnovers coming into the game, finished plus-2 as Southern lost four fumbles. The Braves forced a three-and-out on the game’s first possession and on its first offensive play, receiver Marquis Warford took a handoff and sprinted around left end and up the sideline for a 78-yard touchdown.

After a 26-yard punt gave Southern the ball at the Alcorn 47, the Jaguars quickly moved to a first down at the Braves 1. Alcorn called timeout, and the defense returned to the field invigorated. Malcolm Crockett was stopped for no gain, the Jaguars committed a false start, Austin Howard was sacked and on third-and-goal from the 17, Howard fumbled the snap and Alcorn recovered at the 18.

On the ensuing possession, the Braves faced fourth-and-2 at the Southern 44 and Footman faked a handoff and ran up the middle for a touchdown and a 14-0 lead that Alcorn took into the second quarter.

The Braves tried an onside kick, and the ball went out of bounds at midfield. Southern went exclusively to the running game, and it paid off.

Deonte Shorts rushed twice for 12 yards and Tillery rushed 10 times for 38 yards, including nine straight plays, the last of which was a 1-yard touchdown that got the Jaguars within 21-7 at halftime.