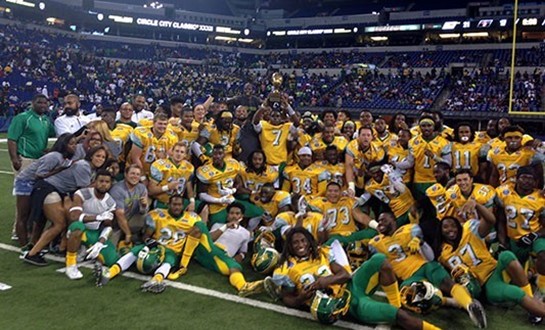 INDIANAPOLIS, Ind. — Kentucky State claimed a Circle City Classic victory over rival Central State for the second consecutive year, putting together a fourth quarter drive to pull out a 21-17 win on Saturday at Lucas Oil Stadium.

Trailing 17-14 with the offense being held scoreless to that point, the Thorobreds got a break when Charles Johnson broke free and took a slant 58 yards to the Central State 22-yard-line. It appeared Kentucky State would have to settle for a game-tying field goal by Turner Warren, but a Central State penalty on the play set the Thorobreds up with first-and-goal from the eight. Two plays later, Alex Springs found Corey Slaughter for what would be the game-winning touchdown.

“It was an emotional game,” said Kentucky State head coach Josh Dean. “That first half took a lot out of us. We tell these guys to keep at it, keep chipping away, and that it will eventually click. It took us all the way to the fourth quarter to make some plays, but we finally did. We just have to find a way to get some continuity and get more of that so we can have some more success.”

The scoring in the first half was unconventional, with all four touchdowns coming on special teams and defense. It was Kentucky State to strike first, with Kolby Griffin scooping up a high snap on a Central State punt attempt and racing 15 yards for a touchdown. After the Thorobreds’ next offensive series stalled at their own one-yard-line, the Marauders evened the score with a 49-yard punt return touchdown by Jordan Howard.

Again, it was in the punt game where Kentucky State was able to take back the lead, with Nathaniel Robinson blocking a Central State punt and returning it for a touchdown. However, the Marauders were able to answer with 10 quick points on a John Adams field goal, followed by a Clim Robbins interception return three plays later. Central State threatened before the half, but Kentucky State’s defense was able to stop the Marauders on six plays from inside the five-yard-line and block the ensuing field goal attempt.

Several defensive players had big games for Kentucky State, with D’Shaunte Glass making 12 tackles to lead the team. Trevon Spencer made 11 tackles with three for loss and a sack, while Robinson finished with 10 tackles, the blocked punt, and the touchdown. Dimitri Cooper also had 10 stops with a tackle for loss, and Raymond Malone had a forced fumble and fumble recovery, making it his fourth straight game with a turnover.

The defenses for both teams were in control throughout the game, with Kentucky State managing just 114 yards of offense and while holding Central State to 243. Springs finished with 82 yards passing, picking up 71 of those on the final touchdown drive. Johnson’s 58 receiving yards on the drive led all players in the game.

With the result, Kentucky State improves to 1-3 on the season and starts out Southern Intercollegiate Athletic Conference play at 1-0, while Central State falls to 2-2 overall and 2-1 in the conference. The Thorobreds are back in action again next Saturday when they travel to take on Benedict College at 2 p.m. in Columbia, S.C.