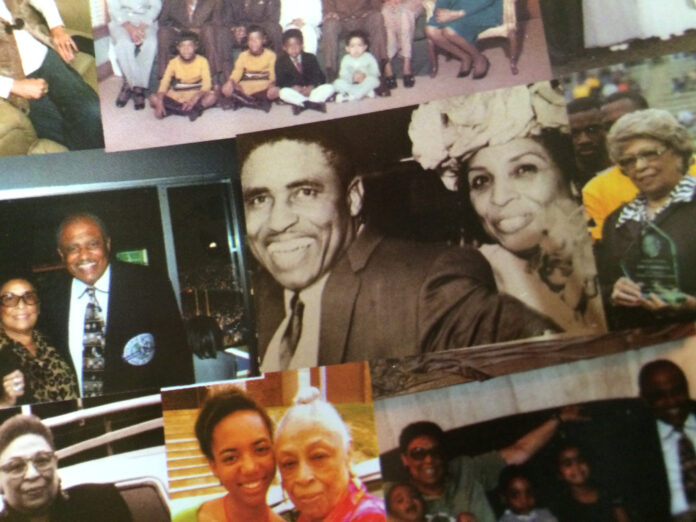 They came to recognize a devotion every bit as notable, as historic and awe inspiring, as the football-related exploits of her famous husband. They came to talk about her grace, her kindness, her sense of style. They came in droves, hundreds and hundreds and hundreds, to Grambling State University’s T.H. Harris Auditorium, to pay their respects to Doris Mott Robinson on Thursday (Sept. 24 2015) in a way she would have liked best: With stories and laughter, with faith and songs.

Doris Robinson, lovingly called “Baby” over a nearly seven-decades-long marriage by Grambling coaching great Eddie G. Robinson, passed at age 96 on Sept. 16, 2015, following the 2007 death of her husband. She had also outlived her children Eddie Robinson Jr. and Lillian Rose Broaden, as well as her parents and daughter-in-law Gloria Robinson. Yet in that time, over those years of widowhood, Doris finally came to earn the profound respect and widespread gratitude that should have been hers all along.

As a museum in honor of Eddie G. Robinson posthumously opened on the campus of Grambling State University, so did an attached banquet room named in her honor. As a parade of groundbreaking athletes were honored by the Grambling Legends Hall of Fame, so was Doris. Her spouse, the child of a broken home, wouldn’t have had it any other way. After all, Eddie Robinson always spoke with more wonder and reverence for having stayed with one wife than he did for only having one job, even as he led Grambling to a towering Division I record of 408 wins between 1941-1997. He recognized, before so many others did, Doris Robinson’s foundational role in his success, and in the success of Grambling State University.

Coach Rob would tell anyone who listened that their’s was a love even greater than the one he had for his school – no small feat. Today, it’s easy to see how their partnership formed a cornerstone for everything Grambling became.

Yet, as these things will, it all began in a moment of happenstance, and then continued with something like divine providence. Doris and Eddie met in elementary school, classmates thrown together by fate. By the time both were attending Louisiana’s now-closed Leland College, after a 1936-38 stint for Doris at Southern University in Baton Rouge, they had long-since fallen in love. She heard about the Grambling job while visiting for a teacher-training program, and had to send word down to a local feed mill, where Eddie Robinson was toiling away for pennies on the hour.

“1941, a King and Queen came from south Louisiana to the piney hills of north Louisiana,” Wilbert Ellis, Grambling former baseball coach and athletic administrator, said during Doris Robinson’s celebration on campus. “During that time, the late [Grambling school president] Ralph Waldo Emerson Jones – known as Prez – was trying to find a football coach. He went to Baton Rouge and interviewed this guy called Eddie Robinson. And it was history after that.”

Together, Doris and Eddie G. Robinson forged a new identity for this tiny country school, with Doris serving as fashion advisor, confidant, tireless companion and speaking coach – even as she continued her family’s legacy in education, working as an instructor and guidance counselor at Friendship and Lincoln elementary schools, and Lincoln and Ruston high schools. She touched countless souls, shaped just as many lives, and she did so with an uncommon flair, an even more uncommon sense of kindness, and a fierce loyalty that girded her husband until the very end.

Ellis was one of those she impacted as a youngster. “Doris Robinson, one of the most beautiful people that you would ever want to see, came into our classroom – and she said, ‘I am your teacher,’” he said. “And she had a lot of bad boys, including me. She told us, as she got us settled down, ‘If you all don’t behave yourself, I’m going to tell my husband, Eddie.’ And when we saw the picture of Eddie, we were quiet and humble! We knew she meant business.”

As focused as they could both be at their respective professions, they remained romantics, still the childhood sweethearts they’d once been. Doris and Eddie would often be seen walking across the campus holding hands, up until Coach Robinson’s health began to fail. Through it all, their home – a sturdy brick house on Adams Street in Grambling – was open to all, including friends and fans, football players and curious media. Inside, there was always a hug and a handshake, always food, always music, always a story and always laughter, even in the twilight of Eddie Robinson’s amazing life.

Things were much the same at T.H. Harris for her home-going service, a touching reminder of the life they built together, but also of Doris Robinson’s role as the emotional counterpoint in this tight-knit community.

She’d become known, while Eddie G. Robinson marched to immortality, as the First Lady of Football. On Thursday, as memories and tributes were shared by a group of friends and dignitaries that included Doris’ confidant Pauline Lee, the wife of Robinson’s longtime assistant coach Melvin Lee; District Attorney John Belton, a key figure in the drive to erect the Robinson Museum; a representative from the Louisiana lieutenant governor’s office; the Mayor of Grambling, State Rep. Patrick Jefferson and Grambling State University president Willie Larkin, it occurred to me that Doris Mott Robinson was being confirmed once again as something much more.

She’d long since become the first lady of our hearts.