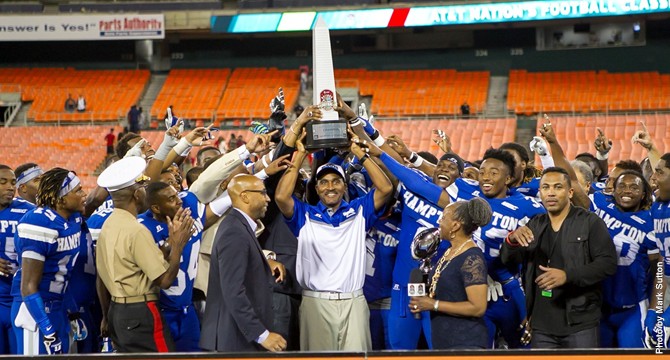 Hampton amassed 460 total yards of offense in the game – a season-high 181 of which came on the ground. Four of the Pirates’ five touchdowns on the night came on the ground – two of them from quarterback David Watford.

Watford rushed 12 times for 58 yards, while also completing 22 of 36 passes for 279 yards and a score. He has nine touchdown passes in three games this season, and he has yet to be sacked.

Chris Dukes rushed 13 times for a team-best 70 yards and his first touchdown of the season.

After Howard failed to score on the game’s opening drive, the Pirates went 87 yards in five plays, taking a 7-0 lead with 10:10 left in the first quarter after Watford hit Allen from 21 yards. Howard turned the ball over on the ensuing possession when Jamie Cunningham threw an interception to Jaston George.

From there, Hampton went on a 16-play, 72-yard drive that ate up nearly eight minutes before Watford scored on his first rushing touchdown of the season – a 9-yard scamper. The PAT failed, giving the Pirates a 13-0 lead with 16 seconds left in the first quarter.

Howard’s first touchdown of the season came with 1:13 left in the half, when Aquinas Freeman rushed 35 yards for the score. The two-point conversion cut Hampton’s lead to 13-8.

But Hampton got the ball back on its own 43-yard line and 1:05 on the clock, marching into field goal territory before Adam Brown connected on a 30-yarder as time expired in the half to send the Pirates into the locker room with a 16-8 lead.

The Pirates opened the second half by going 75 yards in 12 plays, taking a 23-8 lead after Dukes scored from four yards out.

But a Hampton turnover later in the third quarter set up Howard’s next score – a 39-yard field goal from John Fleck that cut the Pirates’ lead to 23-11 at the 6:05 mark.

Brendan Cole intercepted Cunningham in the opening moments of the fourth quarter, giving the Pirates the ball at Howard’s 30-yard line. It took Hampton six plays to cash in on that turnover, and when Watford ran into the endzone from three yards out with 12:19 left, Hampton had a 30-11 lead.

After both teams punted on their respective possessions, Howard went on its most sustained drive of the night, taking 10 plays to go 83 yards before Cunningham threw a 19-yard touchdown pass to Matthew Colvin with 8:10 remaining to cut the lead to 30-19 after the two-point conversion.

But the Pirates answered on the ensuing drive; after a 9-play, 75-yard trek down the field, Garrett ran in from three yards out to give Hampton a 37-19 lead with 3:09 left to play.

Howard started the ensuing drive in Hampton territory, thanks to a lengthy return and a penalty, but Cunningham fumbled three plays later – with George recovering. Howard got the ball back after forcing a turnover on the next possession, but the Bison (0-3, 0-1 MEAC) could not convert and turned the ball over on downs.

Tyrone Ward led the Pirates defense with 10 tackles, 1.5 for loss, and a forced fumble. The Pirates forced three fumbles, recovering one, and had three interceptions on the night.

Keith McAfee had 3.0 tackles for loss and a sack, while also forcing a fumble.

George, Cole, and Dereon Carr had the Pirates’ interceptions; Hampton came into the contest leading the MEAC in picks on defense.