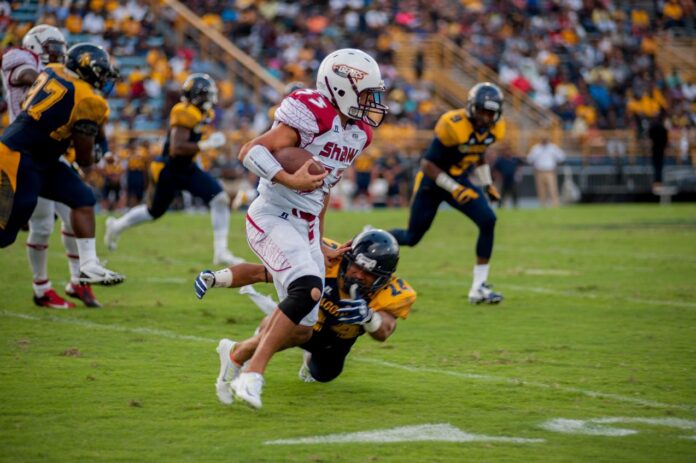 GREENSBORO – Junior wide receiver Denzel Keyes made superb catches in the first quarter. The only problem was he was making them out of bounds. After he decided to make some adjustments he went on to make a career-high six catches to finish with 119 yards receiving and two touchdowns in North Carolina A&T’s 61-7 season-opening football win over Shaw University at Aggie Stadium Saturday.

“In the beginning of the game, I wasn’t leaving him enough space,” Keyes said referring to the player throwing him the ball in redshirt freshman quarterback Lamar Raynard who was making his first career start.

“I was fading a little too early, so I was making the catches but my feet weren’t getting there,” Keyes continued. “As I started attacking them, and then fading when the ball was in the air; letting the ball tell me where to go, then fading, that’s when we started clicking.”

“If it’s a one-on-one opportunity, he knows what’s up,” said Raynard who was 14-for-27 with one interception, three touchdowns and 188 yards passing. “I feel like no one in the country can guard him in those situations.”

The Aggies seemed to have the game in hand even before Keyes started making spectacular catches toward the end of the first half and into the second. Preseason All-American junior running back Tarik Cohen got going early with runs of 15, 16 and 24. Those carries led to a 5-yard touchdown run toward the end of the first quarter to give the Aggies a 7-0 lead. Cohen’s run was set up by a 4th-and-5 conversion on a roll out pass from Raynard to redshirt sophomore Caleb Gabriel that went for seven yards to give the Aggies a 1st-and-goal from the Shaw 7-yard line.

Cohen had 106 yards rushing and two touchdowns on 21 carries. It was his 13th career 100-yard game. He scored again, this time on a 4th-and-1 from seven yards out to open the second quarter. After linebacker Denzel Jones caused a Shaw safety to put the Aggies up 16, Raynard threw his first career touchdown pass, a 16-yard toss to a wide open Gabriel in the back of the end zone for a 23-0 lead.

Shaw’s only score of the game came on an 85-yard interception return by Dwight Campbell.

“I thought he did well for his first game out,” said A&T head coach Rod Broadway about Raynard. Broadway, who earned coaching victory No. 97 on Saturday, said other than the pick-6, Raynard competed.

“He gave them a cheap six there,” Broadway said. “You know one of the things we talk about is not turning the ball over, especially a pick-6. But he made some nice throws through the course of the ball game. He will only get better. Playing as a freshman, he played a lot better than a lot of other freshmen have played in that situation. He has a lot of room for improvement, and he’ll make the improvement because he’s a student of the game. He works his butt off, so he’ll only get better from this point forward.”

Defensively, the Aggies held the Bears to 81 yards of total offense. They also forced two turnovers including a pick-6 by redshirt freshman cornerback Marquis Willis. Saturday marked the 20th straight game the Aggies have forced at least one turnover.

“I think defensively we play well,” said Broadway. “We have a chance of being good defensively if we continue to get better and learn, as well as fixing assignments. It’s very important to the way we play, and I thought these guys for the most part did that tonight.”

The Aggies will get more of a challenge on Saturday, Sept. 12 when they head to Chapel Hill to face the University of North Carolina for the first time ever. That is why Keyes is pleased with the type of performances and his teammates had.

“It was really good to get out there and play somebody else instead of playing our defense,” said Keyes. “It’s a big confidence builder to see that we can really play. We just have to get better this week and play better in order to compete with Carolina next week.”