Tuskegee Begins Season With Shut Out Over Clark-Atlanta, 26-0 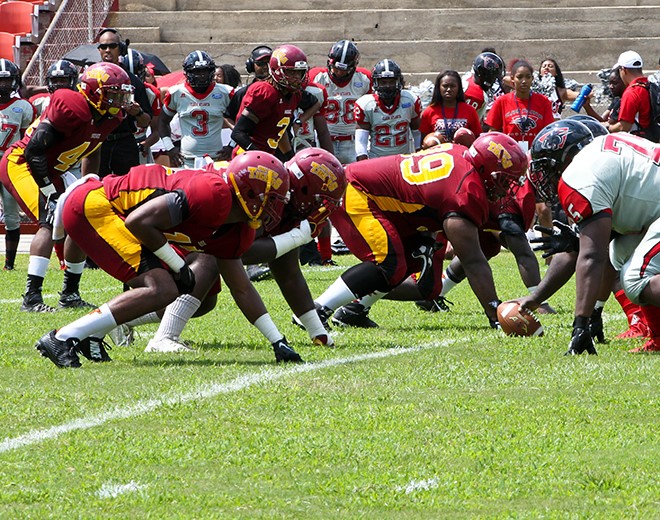 TUSKEGEE, Ala. – The 2015 season opener was one of many questions for the Tuskegee Golden Tigers as they entered the stadium, but many of those questions were answered on a blistering Saturday afternoon at Cleve L. Abbott Memorial Alumni Stadium.

Tuskegee used a stifling defense, and a balanced offense, to shutout Clark Atlanta 26-0 in the season-opener for both teams.


“We’ll take a shutout every game,” Tuskegee head coach Willie Slater said as he began his 10th season at the helm. “On offense, we’re very young up front. We looked good 80 percent of the time and the other 20 we didn’t. We just need to make sure to correct those things as we move forward.”

Defensively, the Golden Tigers held Clark Atlanta to just 203 total yards on offense (on 70 plays) and were all over the field when the ball was in the air, as they picked off three Clark Atlanta passes. The interceptions were timely and two almost resulted in touchdowns for the Golden Tigers. Seniors Jewell Ratliff and Michael Robinson were mere inches away from putting points on the board for Tuskegee with their interceptions, with Ratliff returning his 47 yards for a touchdown only to have it called back on a block in the back penalty. Meanwhile, Robinson intercepted Clark Atlanta quarterback at the Panthers’ 47-yard line and was pushed out of bounds just four yards short. The final interception came later in the game when redshirt freshman Darius Holmes picked off the third and final pass for the Golden Tigers.

Tuskegee (1-0) used multiple ways of getting on the board in the season-opener and it started in the first quarter.

After their opening drive stalled with a missed field goal opportunity, the Golden Tigers used the legs of junior quarterback Kevin Lacey to get on the board in the opening stanza. After a 35-yard punt set Tuskegee up at their own 48-yard line, Kenno Loyal rushed for six yards to set the ball on the Clark Atlanta 46-yard line. From there, Lacey used his legs as he scrambled around the left side and found some running room as he went untouched for the opening score of the contest, putting Tuskegee up 6-0 with 5:43 remaining in the opening quarter.

Following the Robinson interception just two possessions later, the Golden Tigers again used two plays to get into the end zone. Loyal ran three yards to set the Golden Tigers up at the one, which was followed by a one-yard run by fullback Josh Matthews for the score and put Tuskegee up 12-0 with 3:40 left to go in the first quarter.

The score would stay that way until Tuskegee used their special teams to get on the board. After a three-and-out by Clark Atlanta pinned the Panthers back on their own 11 they were forced to punt. On the punt, the ball sailed over the head of punter Patrice Louissant. As he was trying to pick the ball up to get it out of the end zone, he was swarmed by a pair of Golden Tigers and eventually Brandon Griffin was able to fall on the football for the touchdown. Senior Travis Hawkins went around the left end on the point after attempt with the two-point conversion, giving Tuskegee a 20-0 lead in the first half.

The final margin came in the fourth quarter when the Golden Tigers used a four play drive, covering 27 yards to get on the board. After leaving the game for a play, Lacey came back on and hit Leo Gilbert for a 10-yard touchdown and the 26-0 lead.

Individually, the Golden Tigers were led on the ground by Lacey with 41 yards on five carries, while Branden Wilson had 35 yards on just one carry and Dennis Norfleet finished 27 yards on seven carries. Through the air, Lacey finished 11-of-24 for 174 yards and one interception. The receiving corps had several guys with multiple receptions, led by Marquel Gardner with three receptions for 39 yards.

Tuskegee hits the road next week as they will be the visiting team at the Whitewater Classic against Albany State in Phenix City.

“I don’t know what we are going to have to do to beat them,” Slater said. “They have a phenomenal team. We beat them twice last year, so they definately feel like they owe us one.”

Kickoff is set for 5 pm (est) next Saturday.

HBCU Sports Poll: Which Team Will Win The 2015 MEAC/SWAC Challenge?