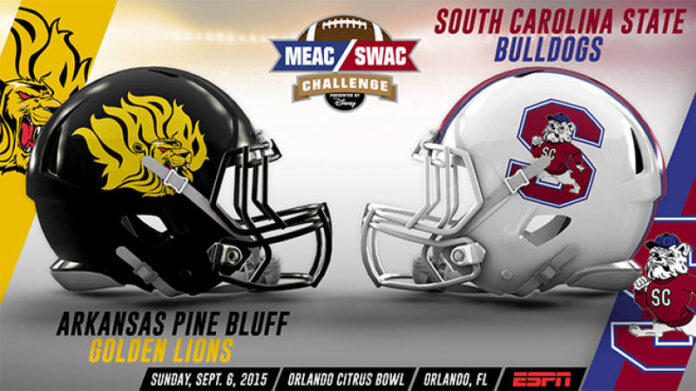 As Monte Coleman and the Arkansas – Pine Bluff Golden Lions prepare for the 2015 season, the team’s first game the 11th annual MEAC/SWAC Challenge presented by Disney is priority No. 1.

UAPB finished 4-7 (3-6 in conference play) in 2014, is the latest SWAC coach tasked with bringing home the title for his conference; the SWAC has only won two MEAC/SWAC Challenge games in the last 10 years.


The man on the opposing sideline who will look to block Coleman’s quest is Oliver “Buddy” Pough, himself no stranger to this game and winning. Pough is making his third appearance in the MEAC/SWAC Challenge, having previously guided the Bulldogs to victories over Alabama State (2005) and Grambling State (2009).

In truth, both programs are solid representatives of their respective conferences. Last season, South Carolina State (8-4 overall, 6-2 conference) grabbed a share of the MEAC championship with its 30-20 win over Norfolk State in the season finale. In 2012, UAPB captured the SWAC championship by defeating Jackson State 24-21 as the Golden Lions won their first league title.

This year sets the stage for new challenges, and milestones.

Monte Coleman: At a glance

·         Entering his eighth season as head coach at Arkansas-Pine Bluff

Oliver “Buddy” Pough: At a glance

·         Has sent a number of players to the NFL, including Rafael Bush (New Orleans), Phillip Adams (New York Jets) and Jakar Hamilton (Dallas)