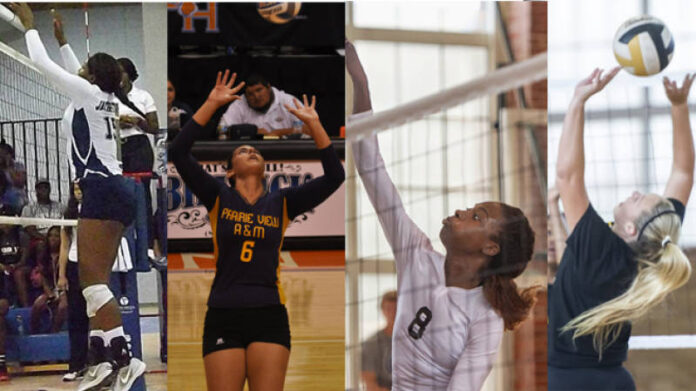 BIRMINGHAM, Ala. – Alabama State’s Myla Marshall and Kori Kutsch, as well as Jackson State’s Mikayla Rolle and Prairie View A&M’s Ana Kiso have been recognized by the Southwestern Athletic Conference as volleyball players of the week for their outstanding performance in competition, August 29-September 1.

Offensive Player of the Week- Rolle
Mikayla Rolle average 2.00 kills per set for a total of 18 and maintained a .333 attack percentage in three matches for Jackson State at the Bulldog Invitational. Against La Tech, Rolle tallied a season-high 10 kills, finishing out the week of play with a .300 hitting percentage with 28 kills and 10 errors in 60 swings. The middle blocker also picked up nine block assists in four starts.

Defensive Player of the Week- Marshall
Myla Marshall was a key factor protecting the net for Alabama State with 12 kills and a team-best five blocks in three matches during the Kennesaw State Invitational this past weekend. Marshall had seven kills on nine attacks (.778 hitting percentage) with two solo blocks and two block assists in ASU’s straight sets victory against Savannah State on Saturday.

Setter of the Week- Kiso
Ana Kiso, the lone Prairie View A&M player on the preseason all-SWAC teams, averaged 15 assists per match and five assists per set for the Panthers at Sam Houston State’s Bearkat Volleyball Invitational this week. Kiso’s best match came in the event finale when she handed out 20 assists against Montana State. The senior also knocked down six kills and recorded 17 digs during the weekend. Against Houston Baptist on Sept. 1, Kiso handed out a season-high 22 assists, giving her 82 for the season.

Newcomer of the Week- Kutsch
Alabama State freshman setter Kori Kutsch had a team-best 42 assists, 12 digs and two aces in three matches during the Kennesaw State Invitational this past weekend. Kutsch had a season-high 22 assists and six digs in ASU’s straight sets victory against Savannah State on Saturday.