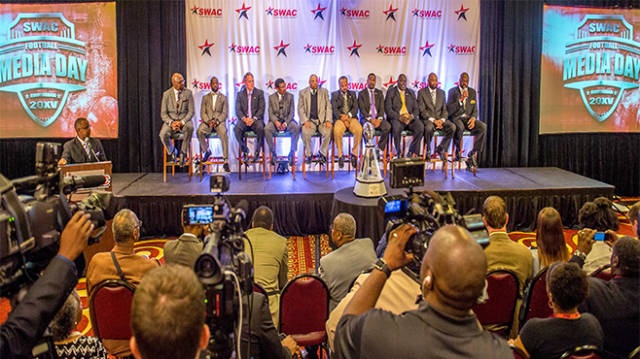 
Brian Jenkins says NCAA investigation rumors do not bother him.

“Fifty percent of it don’t bother me because I’m a strong-minded individual and I know the quality of program I ran at Cookman and I know the quality of program I’m running at Alabama State,” Jenkins said. “I hurt more for the kids. I hurt more for the coaches’ families that are with me. If your wife or daughter has to read that or go to work and hear that about what’s going on at her husband’s place of employment, that becomes embarrassing. That becomes hurtful.”

“I had nightmares,” says Grambling wide receiver Chester Rodgers. “It sounds dramatic, but it was on my mind.”

“I just think (we’re behind) from a development standpoint with some young guys and some guys who were on the team but didn’t get a lot of snaps,” Odums told the Advocate. “It’s tough to develop guys when you don’t have the value of those reps. We’ll just see where they’re at when we start fall camp.”

“We haven’t done anything to deserve a ranking,” said head coach James Spady. “We have to play football games to earn a ranking. So thank you for the respect, if that’s what it is. Last year we were picked last, and you see how that turned out.”

Rick Comegy on the challenges of coaching at Mississippi Valley State.

“Remain humble, execute every week. Our game plan is still to buy into the coach’s system, not getting beside ourselves, not looking ahead too far, adjust week by week to whatever team we’re playing against, Gibbs said to the Associated Press.

“It’s like starting over again,” said Coleman, who would tab Marcus Terrell as starter if the season began today.