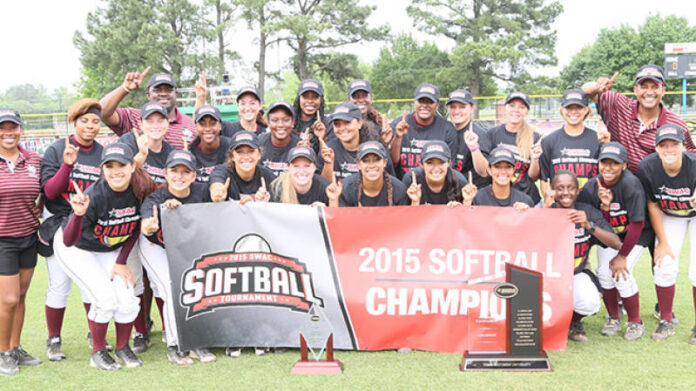 DECATUR, Ala. – Thomasina Garza (4-for-4) led Texas Southern University (14-3, 25-16) to its second consecutive SWAC Softball Championship as the Tigers defeated Alabama State University (11-6, 21-33), 9-0, Saturday afternoon at Wilson Morgan Park. Garza was named the Most Valuable Player of the tournament (MVP) for the second time in a row.

In the first inning, Brianna Parker hit a single to bring home Jessica Miller for the Tigers’ first score. Neither team would score again until the top of the fourth when TSU used a double to score Garza, making the score 2-0. The Tiger managed two addition runs before closing out the inning with a four-score game lead.


A two-run double courtesy of Parker allowed Garza her second run of the day. The rally grew larger as TSU finished the fifth frame with a score of 6-0. The Hornets worked behind the bat at the bottom of the fifth with Aleesa Yanez slugging a double, but the runner was not successful in making it home.

To finish the game, Krystalani Yockman slammed a homerun down center, leaving the score 9-0 at the top of the seventh, granting Texas Southern championship victory.

Sammantha Jimenez (7-4) pitched a seven-inning shutout – her first this season. After facing 29 batters, she only allowed eight hits, and one walk, while tossing one strikeout. Garza and Chanler Powell managed a game-high two runs, while Yockman secured a game-high three RBI.

Four, Tigers were named to the All-Conference team – Garza, Parker, Brianna Simpson and Chelsea Guenther. The entire team is listed below.

The championship game will play tape delayed tomorrow, May 10, at 9 p.m. CST on ESPNU.

The NCAA Division I Softball Selection Show will also be Sunday, May 10 at 9 p.m. CST on ESPNU. Tune in to see which team Texas Southern will face in the first round.