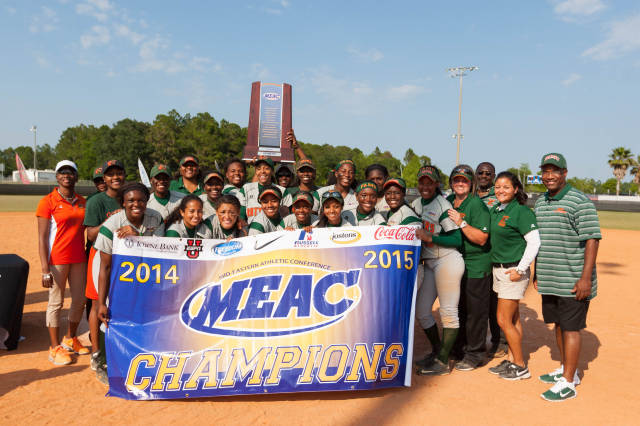 This is the second consecutive title for the Lady Rattlers and the 11th overall.

“This team went through a lot this season and we wanted to have a goal to get back to the championship game,” Wiggins said. “We did not come out ready to play in the first game and we were intimidated. We came out in the second game and carried ourselves like champs. I am so proud of these girls and how well they’ve come together to play as a team.”

Florida A&M (18-37) lost the opening game of the championship finale to Bethune-Cookman, but clinched the title with a 2-0 win over the Lady Wildcats (22-29) in the double-elimination tournament. FAMU plated a run in the first and a run in the third to account for the scoring.

In the championship game, the Lady Rattlers grabbed one run on two hits to take a 1-0 lead in the second inning.

Miesha McBride singled to begin the game and advanced to second on Amanda Weaver’s sacrifice bunt. Alyssa Weaver drove McBride in with a base hit to right center to give Florida A&M a 1-0 advantage.

The Lady Rattlers added to their lead in the third as Jessica Nathan and Tashayla Irvis reached on back-to-back errors. Denise Anderson hit a sacrifice fly to left to bring Nathan in for the score.

Pereira, the tournament’s Most Outstanding Player, cruised in the championship game by scattering five hits and striking out one to pick up her 15th win of the season. She pitched 35.0 innings throughout the tourney, allowing seven runs (four earned) on 24 hits, with 11 strikeouts and nine walks, to earn the top honor and a spot on the All-Tournament team.

Calesha Shelley had two hits, while Kaitlin Alamprese, Melissa Berouty and Mariah Davies each recorded one for Bethune-Cookman. Sabrina Anguiano (18-25) recorded the loss.

In the first game, Bethune-Cookman plated runs in the first and third innings to earn a 2-0 win and force the deciding championship game.

Florida A&M who earned the conference’s automatic berth to the NCAA Division Regionals awaits their opponent that will be announced during the NCAA Softball Selection Show Sunday, May 10 at 10 p.m. ET on ESPNU.