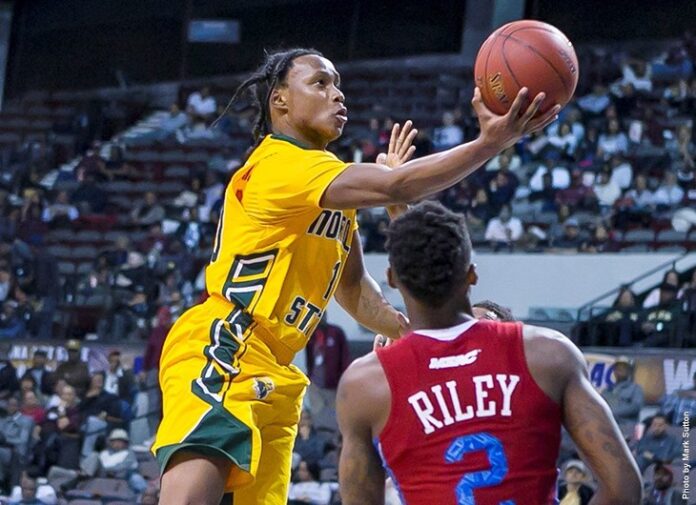 NORFOLK, Va. – After a slow start, the Norfolk State men’s basketball team pulled ahead and then away from South Carolina State in a 68-54 win on Wednesday night in the MEAC tournament quarterfinal round at Scope Arena.

The Spartans trailed by 10 six minutes into the game and by as much as 15 later in the first half. NSU, though, outscored the Bulldogs 16-2 to close out the first stanza and then jumped ahead thanks to a 14-2 spurt early in the second half.


Junior Jeff Short got NSU going in the first half, scoring 13 on NSU’s 16 points during that first half run. He finished with 25 points on 9-of-14 shooting, his third 20-point output in four games.

NSU moves on to the tournament semifinals on Friday at 8 p.m. The Spartans will play against Thursday night’s quarterfinal winner between UMES and Hampton. They advanced to the semifinal round for the fourth time in five seasons.

The victory improved NSU’s record to 20-12 on the year, the third 20-win season in the program’s Division I history and the third in four seasons.

The Spartans advanced despite shooting just 14-of-27 from the free throw line, including 2-of-9 in the first half. NSU shot 25-of-48 for the game, though, while holding the Bulldogs to slightly less than 40 percent (19-of-48).

A season-tying low six turnovers, while forcing 13 by S.C. State, allowed the Spartans to finish with a 19-7 edge in points off turnovers in addition to a 36-18 advantage in points in the paint.

The contest did not start off well for NSU, though. South Carolina State hit back-to-back 3-pointers during an 11-0 run that put the Bulldogs up early, 16-6, just six minutes into the game. They continued to connect from long range, as Edward Stephens hit his fourth 3-pointer in as many attempts to put them up by a 29-14 score at the 6:07 mark.

Stephens finished with 14 points on 5-of-8 shooting to lead the Bulldogs.

The Spartans, or more specifically Short, had the answer. He scored 13 points during that 16-2 run that lasted the last six minutes of the half.

The Spartans trailed by just one going into the half, 31-30. The Bulldogs hit 6-of-7 from beyond the arc in the first stanza but just 2-of-11 after intermission.

Taylor sank a trey early in the second half, and Short drove into the lane and hit a floater at 17:13 to put NSU ahead for the first time since leading 4-2. Those buckets began a 14-2 run for the Spartans, and Short scored the last four points of that spurt for a 44-35 lead at the 11:46 mark.

NSU pushed the lead to double digits thanks to a trey from senior Malik Thomas in the left corner and another basket by Short. The Bulldogs were able to cut the deficit to five with 8:46 to go after scoring six straight.

But once again, the Spartans answered right back, as Thomas found Taylor for a backdoor cut and a thunderous slam with five minutes left. That completed a 10-0 run, made it 59-44 in favor of the Spartans for their biggest lead of the game and got the NSU crowd on its feet and roaring its approval.

The Spartans led by double digits the rest of the way.

Senior Jamel Fuentes added eight points, while freshman Jordan Butler filled in for an injured RaShid Gaston in the second half and finished with five points and a career-high eight rebounds.