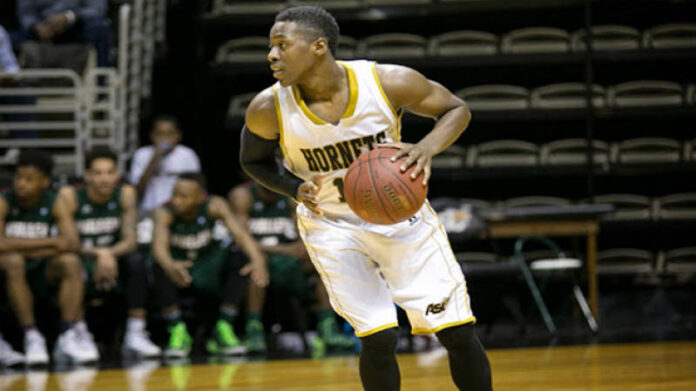 Wendell Lewis scored 22 points and Jamel Waters added 20 as Alabama State moved into the semifinal round of the Southwestern Athletic Conference Tournament with a 93-81 win over Mississippi Valley State.

“Great game for us this afternoon,” head coach Lewis Jackson said. “The first half was kind of nip and tuck there and we got out of character because we started trying to match jump shot for jump shot and our goal was to go inside and use our height advantage against them.”

The Hornets shot 51 percent from the field as Lewis and Waters had plenty of scoring help.

ASU (19-9) broke open a close four-point halftime score by scoring the first eight points of the second half and outscoring MVSU 21-7 during the first nine minutes opening up a 71-53 lead.

ASU went on to lead by as many as 26 points after two Lewis free throws with 4:38 left in the game.

After those free throws the Hornets emptied the bench.

ASU also out rebounded the Delta Devils 50-33 with Strong completing a double-double with 13 rebounds to go along with his 10 points. Lewis grabbed nine rebounds and Brown added five.

The Hornets did a good job of sharing the ball finishing with 20 assists.

It was the second time in the past three games ASU has finished with 20 or more assists. Waters, Brown and Robinson finished with four assists each to lead the team.

Waters also scored his 1,000th career point early in the second half.

He entered the game with 989 points and he scored his 11th and 12th points on a pull up jumper in the lane to give him the necessary points to put him over.

He scored 14 of his 20 points in the second half in becoming the 28th player in ASU history to reach the milestone.

“First of all I would like to congratulate Jamel,” Jackson said. “He’s been a three-year starter for us, starting since he was a freshman and this is a result of the work he puts in.”