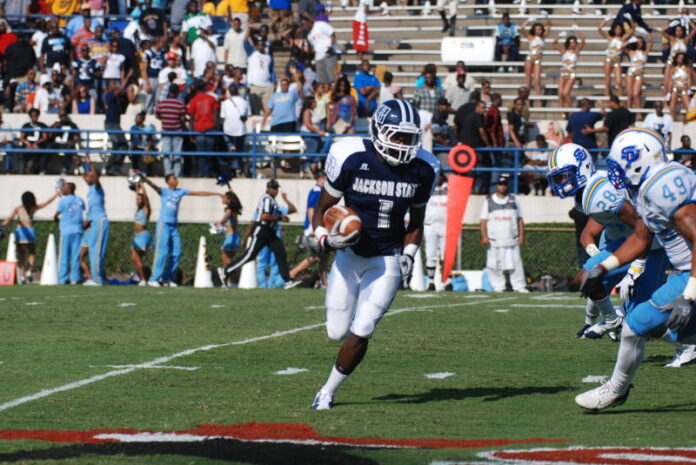 According to the website NFL Draft Diamonds, several NFL hopefuls, including some who played on the Jackson State football team, were unable to complete workouts in front of scouts after reportedly failing to perform well during the 40-yard dash.

Jackson State University, the prestigious black college, turned their players away after they did not perform a fast enough forty.

The weather was 28 degrees and after all the players ran their forty only one player was able to perform drills in front of the scouts. Get this, the player was not even from Jackson State.

Linebacker Ariane McCree and wide receiver Tobias Singleton were scheduled to participate in the workout on Thursday before being dismissed after the 40-yard dash.

After the 40, NFL scout called together all the prospects. Said everyone was cut except one, Stephanio McNair. #proday

Following the pro day, NFL Draft Diamonds seemed to point the finger at school and chided the entire process in a series of tweets.

I am willing to put them on blast, yes it was a Black College, the school today was @JacksonStateU Pretty sad #AlreadyFacingAdversity

It is very difficult to come from a black school and make it to the Pros. But Walter Payton’s school? Really?

Regardless of talent, you have to do better than that. Jackson State is a bery prestigous school. Those kids deserve better

It seems to be an unfortunate break for players to be told their NFL dreams were dead on arrival after the 40, but the these athletes have learned that professional sports can be cut-throat, unforgiving business.

“I was looking forward to doing everything. I thought it was going to be a regular pro day.”

“It’s a business,” said Singleton, who clocked an unofficial best 4.6 and had several of his family members attend. “You can’t go into every situation looking for something to be good. It’s an eye-opener. Now I know what I have to do.”