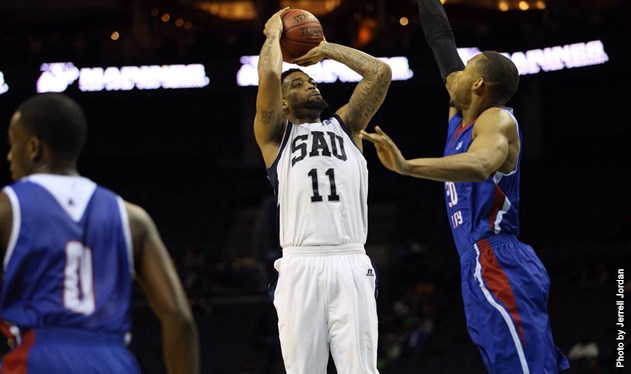 Charlotte, N.C.  –  St. Augustine’s had four players score in double figures and never trailed in the second half as they took a 61-54 win over Elizabeth City State in the first round of the CIAA Men’s Tournament at Time Warner Cable Arena on Tuesday evening.

Elizabeth City State jumped on St. Augustine’s  early, bolting to a 7-0 lead but the Falcons battled back, taking the 14-13 lead.  Keith Crawford would nail a three-pointer to stake the Falcons to a 17-13 lead at the 7:07 mark in the first half.

ECSU would cut the lead to 27-25 following a three pointer from Glenn Patterson with 1:21 remaining in the opening stanza.  The Falcons would get a jumper from Marquis Hines to make it 29-25 and would carry that lead into the halftime break.

In the second half, St. Augustine’s jumped to a 36-26 lead, their largest of the game, when Marquis Hines boarded a missed free throw and got the put back with 16:30 remaining.

ECSU was able to cut the lead to 36-29 following a Brachon Griffin free throw with 15:51 remaining.  The Vikings then cut it to 36-31 with two more free throws, this time from Darrell Ward.

After a Falcon turnover, ECSU trimmed the lead to 36-33 following a Darrell Ward layup with 14:24 remaining.  DeCarlos Anderson would bring ECSU to within one at 36-35 after he got two free throws to fall with 13:47 remaining.

SAU would break the 12-0 ECSU run when Keith Crawford tipped in a miss, providing the 38-35 ECSU lead.  After two technical free throws, SAU jumped ahead 40-35.  Anthony Gaskins then got a three pointer to drop, giving SAU the 43-35 lead with 11:00 to play.

The St. Augustine’s lead would shrink to 43-27 following a pair of John Tatum free throws with 10:42 left.

ECSU was able to score on two straight possessions, when Tatum nailed a three pointer then added two free throws on their next possession to narrow the Viking lead to 45-42 with 7:11 to go.

Anthony Gaskins would answer for SAU, when he drilled a long three pointer with 6:38 left to make it 48-42.  Gaskins would then hit another three pointer from the exact same spot a possession later to extend the Falcon lead to 51-42 at the 5:48 mark.

ECSU got 11 points each from John Tatum and Darrell Ward.

“Tonight was a complete team effort,” said St. Augustine’s Head Coach MarQus Johnson. “We defended and rebounded well and when we do both, we will be in a lot of ball games.”