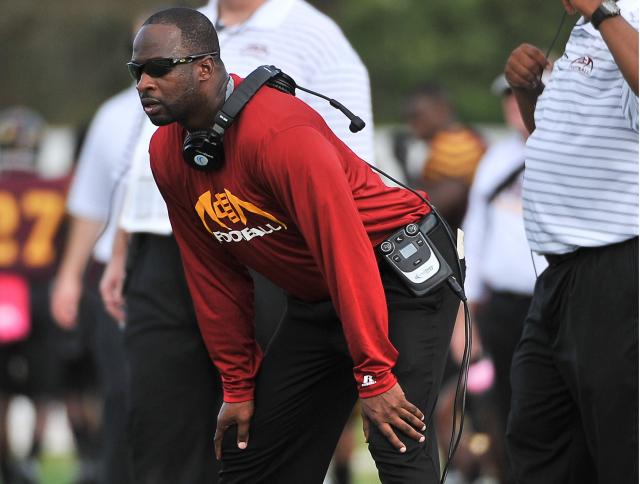 This Brian Jenkins story has all the ingredients to make the ideal cray-cray college football coach.

A splash of improper benefits. One lawsuit. A pinch of bullying. A scoop of NCAA violations. And a possible knifing threat to taste.

Jenkins, who now is the head coach at Alabama State, allegedly played the role of football coach from hell during his tenure at Bethune-Cookman.

Every athlete, at one point, runs into a coach who is cray, because coaching is the only form of dictatorship that isn’t frowned up by the United Nations.  And being a kooky dictator is encouraged.

There are levels to coaching throwed, though.

There is the coach who makes the entire team run extra suicides in practice because Mr. Million Dollar Move, 10 cent jumper keeps forgetting the basic concepts of the motion offense.

There is the coach who holds practices at odd hours of the day, night, weekend or after you’ve just completed that friends with benefits session with that one chick from English who sports the “Flawless” tattoo etched in cursive just below her right shoulder. HER, BRUH!!!

You hate that mofo having the reckless Kanye confidence to hold practice at a time that conflicts with sleeping, studying and gaming.

“Imma let you go to church in a minute, but we gotta review this play on film one hundred more times.”

Then there is the coach who gets really pushy-punchy and spittle-in-your facey following the screw ups during drills.

This maniac likes to put his hands and bodily fluids on you while demonstrating the proper way to perform certain techniques. He just can’t wait to grab player and choke him…it’s his pleasure!

Where does Jenkins fall on the cray coach scale?

Let’s examine the allegations against him.

One of the incidents that apparently sparked the investigation at Bethune-Cookman involved Jenkins allegedly threatening two players — linebacker Rahdeese Alcutt and defensive end Brandin Hudson — with a steak knife at a pregame meal.

According to a letter Alcutt provided at the request of Bethune-Cookman officials as part of the investigation, a teammate accidentally spilled a drink and Alcutt began laughing. Because Jenkins doesn’t allow talking at the pre-game meals, the commotion irked the head coach, Alcutt said.

“At this time, Brian Jenkins walked over to me and picked up a knife and pointed it at me and (Hudson) saying, ‘Do I have to cut your (expletive) throats to get you to be quiet?” Alcutt wrote in the letter. Jenkins then stared at the two players for several seconds, he said.

Verdict: Kim Jong-un ’bout to blow up the world crazy.

“We were going 26 to 28 hours, easy, every week,” said former Bethune-Cookman offensive lineman Blake Pritchard, who played in 2011 and 2012. “We got the rule book out once and read it, and we were like laughing about it, because it was so obvious. Dude, we weren’t close to those limits.”

After Jenkins surprised the team with a 1 a.m. practice — its third practice in 18 hours — there was a mutiny, the assistant coaches said.

Coach Jenkins gave me the money, I got in a car with a grad assistant and we drove to Tampa (where South Florida University is located) to get my transcript,” Virgin said. “The rest of the team got on the bus. I got in this private car and went to Tampa. When we got it, we drove to Miami and I played in the game.”

The side trip for Virgin to South Florida was not a team secret. Three of the assistant coaches who spoke to the Advertiser independently confirmed the trip and provided specific details.

According to NCAA rules, simply driving Virgin to South Florida would constitute an extra benefit provided to a player. Providing the money to clear his student account could be deemed a major violation.

Leaving players like Justin Henderson homeless, some to live in their trucks?

Ryan Kobbe, a former assistant, and John Schmitz, a massage therapist/trainer, have filed a joint federal lawsuit against Bethune-Cookman alleging they weren’t paid for their work under Jenkins. According to court documents, both men are seeking more than $15,000, although an exact dollar figure isn’t cited.