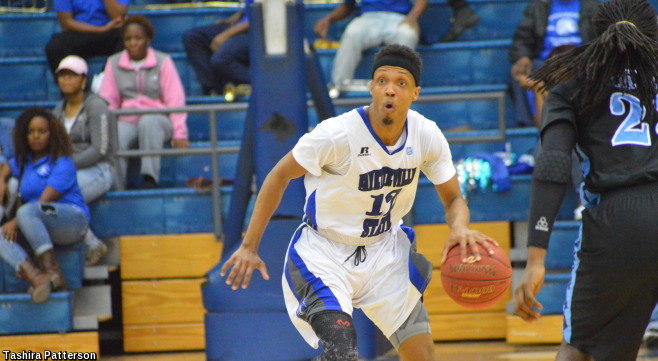 The Broncos held an advantage for the majority of the first half. Livingstone trailed 27-17 with 6:41 on the clock following two free throws from senior guard Anthony Shelton.

Ty Newman erased the deficit for the Blue Bears with some long range shooting. Newman made five field goals and two free throws, including four three-pointers in the final five minutes of the first.

Newman tied the game 37-37 with a three-pointer with 1:12 remaining. Senior forward Torian Showers  had a 1-of-2 trip at the foul line on the next possession. Newman responded with a last second field goal to give Livingstone a 39-38 lead at the half.

Fayetteville State led again for the majority of the second half. Regulation boiled down to the final 20 seconds. Sophomore guard Joshua Dawson connected on a pair of free throws for an 82-78 lead for the Broncos. Newman drove and scored in the paint on the ensuing series to cut the lead in half.

Junior guard Juwan Addison made his first, but missed the second free throw attempt. Newman came through in the clutch yet again for LC with a game-tying three-pointer  with five seconds to play. The Blue Bears forced a turnover before time expired.

Addison had to foul Juwan Cole; who went to the foul line with a chance to win.

Cole missed the foul shot, sending the game to overtime. The Broncos forced three turnovers and shot 14-of-16 (87%) from the free throw line in the extra period. Fayetteville State edged the Blue Bears 16-12 for the 99-95 victory.

Shelton entered the contest with 990 points for his career. He scored his 1,000th with a three-pointer at the 1:48 mark of the second half. Shelton finished with 13 points; he was one of six Broncos with double figures in points. Dawson had a team-high 17 points and 13 assists. Showers and junior forward Marquette Hill  both had 14 points.

Newman finished with a game-high 38 points, including 7-of-8 (87%) shooting from beyond the arc. Daryl Trayham pitched in 20 points and four assists.