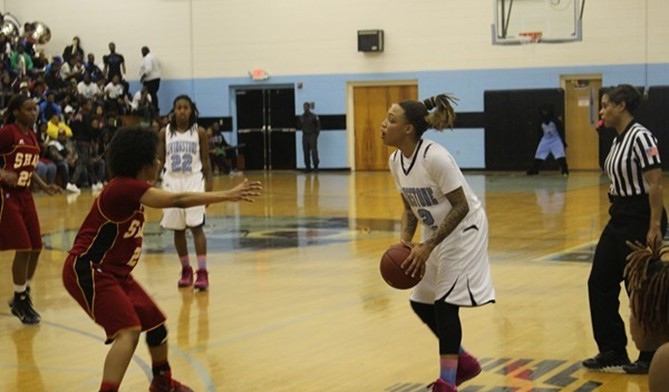 The Lady Blue Bears’ historic season continues to move along as they scrapped out a tough and determined 53-47 win over the Lady Bears.

The Lady Blue Bears are dominating game after game, as they continue to break through barriers and set records.

The contest opened up on a 5-0 run by the Lady Blue Bears, as the Bears hung tough for a few minutes in a possession-by-possession battle.

The nerve-racking first half forced the Lady Blue Bears to have a few offensive looks that couldn’t find the bottom of the net, shooting just 23 percent  in the first half.,

The team took a lot of shots, that on a normal night would go in, but it wasn’t before long that they were able to muster up a 16 point lead, with 2:57 left in the half after a fast break layup by LaBrea Walker.

When Cierra York was asked what happened in the first half and why they had such a slow start she responded “We haven’t played in a week so I think we were just trying to get our flow back. Although our shots were not falling, we knew we had to step up on defense and make stops.”

The second half saw a lot of challenges for the Lady Blue Bears shooting just 15 percent from the field.

The Bears out shot the Lady Blue Bears 26-24, but the free throw line was another saving grace as they went 12-16 at the line.

The game grew intensity as the Bears came within as close as three points with 9:55 left in the contest, after the Bears’ Kaiya Coleman knocked down a jumper.

The two teams traded a few offensive conversions, giving the Blue Bears a competitive run, but they fought hard to hang on to their advantage.

The Bears attempted to rally, pulling as close as five points with 3:26 remaining, but the Lady Blue Bears hit back-to-back foul shots by Wende Foster and Amber Curtis down the stretch to seal the win.

“I expect the games to be close in scoring and more intense because as we play teams a second time around they want revenge, but my eagerness and the support from the team to our fans is what pushes me to go hard every game and hopefully finish with a win as we did tonight,” said Amber Curtis.

Amber Curtis had a solid performance to lead the Lady Blue Bears’ win.

Cierra York was the only other player to finish in double figures with 11 points, and four rebounds. York snatched three steals and went a perfect 4-4 on the charity stripe.

Wende Foster pulled down a game-high 13 rebounds, followed by Taylor Daniels who had 10 rebounds in the win over the Bears.