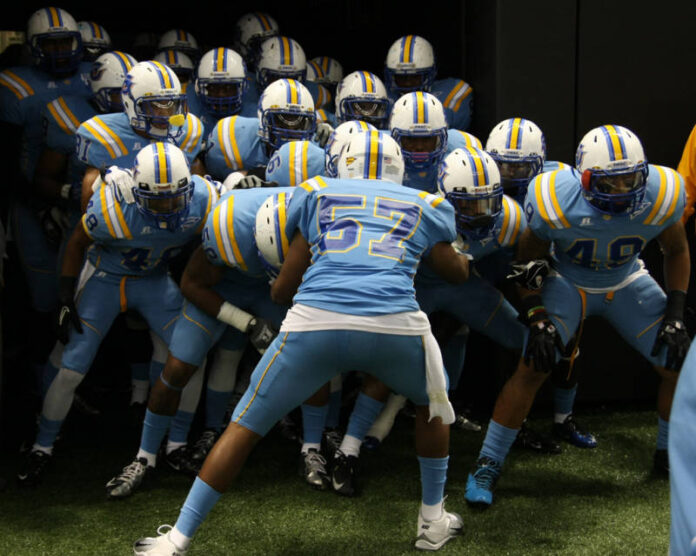 The day after the celebration of 17 and 18-year-old football players being placed in a system that only values them for their bodies more than their brains is supposed to be one where sports gas bags like me declare the winners and losers of this arms race.

With unshaken certainty, bloggers, recruiting experts and men in suits on television or in sweatshirts sitting in a radio studio, will tell you which school was able to gather the most impressive haul.

The underlying problem is that we don’t really know who won or lost. It’s virtually impossible to do so, because everyone — coaches, school administrators, alums, fans and message board trolls — have all raised their fists and voices in victory. If everyone says they’re winner, how can there be any losers?

You can’t turn to any sports program, read any official school athletic website or online recruiting gathering place without someone talking up a coach for a job well done in signing a bunch of players 99 percent of the fan base hadn’t seen in action or even heard about before Tuesday.

I, for one, don’t know who is any good, as I don’t follow college recruiting or high school sports for that matter. I can only assume these kids holding court in front of the media brigade flanked by their parents are good at football due to the fact they’re in a position to be recruited in the first place.

But Isn’t everybody in high school good, though?

Regardless of our collective ignorance to the backgrounds of the signees, we feed on all the grandiose hope trafficking.

The biggest purveyor this propaganda are the coaches themselves, who have nothing but sterling overtures to say about the incoming freshmen or transfers.

They can’t wait to tell you how pleased they are with the process.

Football coaches are never completely happy about anything. They’re controlling manics who strive for perfection they never will achieve.

But with recruiting, it’s spittin’ game to new level.

“We are very excited about the group of guys we signed today,” Alcorn State head coach Jay Hopson after he was able to sign 27 players. “We recruited players that could come make an immediate impact and that wanted to become a Brave.”

“We are very excited about this group of signees that have joined our Grambling family.”

“We’re very excited,” Simmons said. “Our goal was to recruit guys that wanted to be Panthers, and after visiting with them and bringing them to campus, I know guys that we have signed will fit in well.”

Darrell Asberry at Texas Southern was both pleased and excited when referencing all the guys he was able sign.

“I’m very pleased with our signing class,” said Asberry. “I thought today went well for us. We’re excited about the student-athletes we signed today and we feel they mix in well with the other two and three star recruits that we brought in mid-year.”

Arkansas-Pine Bluff head coach Monte Coleman called National Signing Day “remarkable” and “one of the best” classes during his tenure.

Sounds like a program that will be making a run from worst to first in 2015.

While some coaches will attempt to woo the masses with the hope springs eternal refrain, seasoned veterans of National Signing Day will harp on their programs addressing the all important needs.

You know, like “immediate needs,” according to Delaware State head coach Kenneth Carter.

Latrell Scott said his only purpose on Earth was to “address the needs of the program,” and he signed “12 quality student-athletes who are a good fit for our program.”

Rod Broadway, who helped lead North Carolina A&T to a share of the MEAC championship, said he “filled most of our needs.”

Coaches like Jerry Mack at North Carolina Central and Earnest Wilson III at Savannah State were specific in the needs they needed.

And then there was the one coach out there who knew what National Signing Day is all about. Not acquiring football players to win football games and football championships.

“The fact that several of these student-athletes are doing well in the classroom shows their commitment,” Albany State head coach Dan Land said . “It also shows that their high school coaching staffs and teachers have taken a high interest in their education.”

That’s why sports cable networks have hours of coverage. That’s why fax machines are important. That’s why schools throw signing day after parties.

That’s why college football fans in the south vent with wayward anger when a 17-year-old kid curves State U. or grabs their junk in climax when that minor says yes to the school of liberal arts.

That’s what makes everyone winners, Danny. Or just culprits in this exploitation scheme.