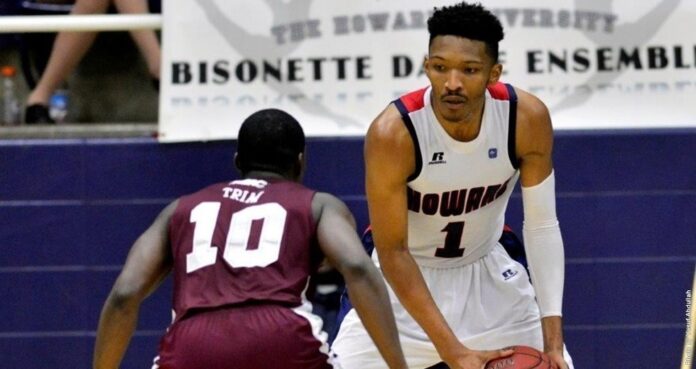 PRINCESS ANNE, Md. – University of Maryland Eastern Shore stumbled in the second half on Monday night, suffering an 83-74 defeat at the hands of the Howard.

UMES (13-11, 6-3) fell back to fourth place in the MEAC with the loss, which ended a three-game winning streak for the Hawks.


Early on, the matchup appeared to be a favorable one for UMES. In a battle between two surprise contenders in the MEAC, the Hawks jumped out to an early lead from the get-go.

UMES clamped down on defense, preventing Howard from scoring in the opening five minutes. With a 6-0 lead out of the gates, the Hawks held the advantage immediately and did not trail until the final minute of the first half.

UMES led by as many as 11 in the first half, before that margin was whittled down as the Hawks played without Mike Myers. The senior forward picked up two early fouls, and played just five minutes in the first half. Howard briefly led 33-31 before a putback at the halftime horn by Dominique Elliott knotted the game at 33-33 at the break.

The Bison stormed out of the locker room, recapturing the momentum and lead. Howard, led by James Carlton and James Daniel, began the second half on a 13-3 run, building a double-digit advantage. The Hawks trailed by as many as 14 points in the second half, and never truly threatened to pull even.

Devon Walker scored 18 points on 5-of-7 shooting from deep, but the senior guard fouled out to limit the Hawks’ offensive arsenal, already playing without sharpshooter Devin Martin.

Carlton scored a game-high 31 points for Howard, putting out an inside-out display. Daniel, the MEAC Preseason Player of the Year, caught fire from deep, scoring 21 points on 5-of-10 shooting from the three-point line.

With Carlton and Daniel shooting hot, UMES could not string together enough defensive stops in the second half. The Hawks shot 43 percent from the floor, and 53 percent from long range, both decent marks. However, the shooting paled in comparison to the hot hands for the Bison as Howard shot 57 percent overall and 57 percent from beyond the arc.

In addition to Walker’s 18 points, Myers, Elliott and Ishaq Pitt all cracked double digits. Myers, limited by foul trouble, scored 14 points, with 13 of them coming after halftime and most of his damage coming at the foul line (8-of-12). The Hawks left some points on the table again on missed free throws, making 60 percent of the attempts (20-of-33).

Instead, UMES dropped to 13-11 overall and 6-3 in conference action. The Hawks slipped to a tie for fourth place in the MEAC standings alongside South Carolina State, as Howard leapfrogged UMES with Monday’s result.