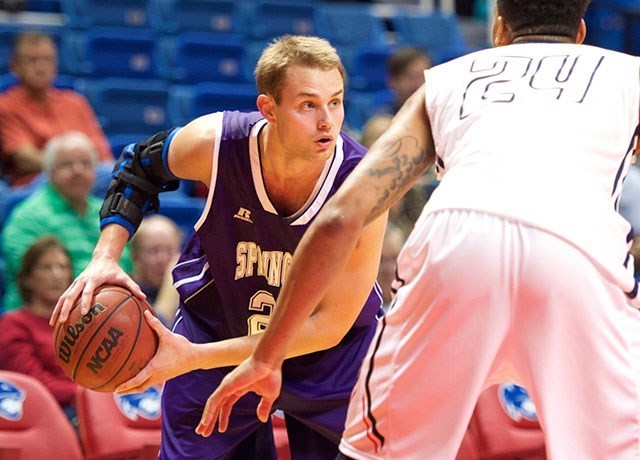 FRANKFORT, Ky. – Spring Hill College used an 11-0 run at the end of regulation to propel them to a stunning 61-59 overtime victory against Kentucky State on Thursday night at the Exum Center.


The Thorobreds built their lead to a many as 11 points in the first half when Ivan Hooker connected on a jumper to push the score to 30-19 in favor of KSU at halftime.

In the second half, Kentucky State came out as the aggressor and pushed their lead to 14 when Darrien Wilkins hit a layup to put the Thorobreds ahead 43-28 with 12:35 remaining. Spring Hill responded with a 9-0 run to cut the KSU lead to six before the momentum swung back to KSU who went on a 8-3 run of their own. When Ulysses Thomas III hit a 3-pointer with just under four minutes remaining to push KSU’s lead back to 11, everything looked to be going the Thorobreds way.

Unfortunately for KSU, they wouldn’t get on the scoreboard again in regulation. SHC went on an improbable 11-0 run to close out regulation and send the game into overtime.

Junior guard Wesley Pietri had 13 points to lead SHC while sophomore center Stefvanovic added 12 points to go along with five board. DeVaughn Hardrick also pitched in with 10 points and a game-high eight rebounds. SHC controlled the boards with a 43-34 edge in rebounding.

Kentucky State continues their current three-game home stand when they host Tuskegee on Saturday afternoon. Tip-off is scheduled for 3 p.m. at the Exum Center.