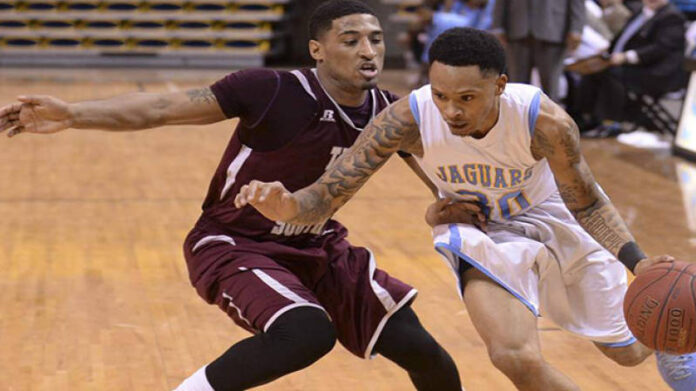 Baton, Rouge, La. – Chris Thomas made a tie-breaking free throw with 0.7 seconds left to give Texas Southern a 59-58 victory against Southern on Monday night in the F.G. Clark Activity Center.
The score was tied and Texas Southern was playing for the last shot when Christopher Hyder stole the ball and drove toward the Tigers basket. Madarious Gibbs came from behind and blocked Hyder’s layup. Thomas rebounded and was bumped by Southern’s Adrian Rodgers, and a foul was called as the final buzzer sounded.Deverelll Biggs led all scorers with 20 points for TSU (5-10,2-0).  Chriss Thomas added nine points and five rebounds.  Tre’Lun Banks led the Jaguars (4-12, 1-1) with 16 points.  Keith Davis and Rogers scored 13 and 11 points respectively.
After reviewing the play, the officials ruled that the foul came with 0.7 seconds left. Thomas made the first free throw and intentionally missed the second, so the Jaguars rebounded and called timeout.
Southern inbounded with 0.5 seconds left with a long pass to Rodgers, who caught the ball, turned and made a three pointer. But another replay review showed he released the ball after the buzzer, giving Texas Southern the victory.
Alabama A&M def Alcorn State 67-46

NORMAL, Ala. — Nicholas West scored 17 points and Ladarius Tabb added 15 to help Alabama A&M defeat Grambling State 67-46 on Monday night.
The Bulldogs (2-10, 1-1) snapped an eight-game losing streak by racing to a 33-14 lead at the half and shooting 49 percent for the game.
The Tigers (2-10, 0-2) shot 26 percent in the first half and commited 15 turnovers en route to losing its fifth straight.
West, who also had nine rebounds with 10 points in the first half.  AAMU held GSU scoreless for nearly eight minutes and scored 10 points to go ahead 29-10 with three minutes left in the first half.
It was the first win for either team against a Division I opponent.
A’Torri Shine led GSU with nine pointsAlabama State def Jackson State 72-52

MONTGOMERY, Ala. — Steve Rogers Jr. came off the Alabama State bench to score 14 points and spark the Hornets to a 72-52 win over Jackson State in a Southwestern Conference battle Monday night.

The hometown freshman was 3 of 6 from the field and a perfect 6 for 6 from the line to lead the way, with Jamel Waters adding 13 points, Maurice Strong 12 and DeMarcus Robinson 11.
ASU took a 10 point lead, 28-18 after a low scoring first half and was 10 points better than the Tigers in the second half, outscoring them 44-34 down the stretch.
The Hornets (6-5, 2-0 SWAC) came into the game looking for consistency and found it, shooting 47.1 percent from the field (24 of 51), 40 percent from distance (6 of 15) and 75 percent from the line (18 of 24).
Kaven Bernard scored 16 points to lead Jackson State (3-12, 1-1).Alcorn State def Prairie View
LORMAN, Miss. — Leantwan Luckett made 14 of 18 free throws and finished with 26 points as Alcorn State beat Prairie View 68-62 on Monday night to break its eight-game losing streak.

Marquis Vance scored 18 points with nine rebounds for Alcorn and Michael Davis added 10. The Braves were just 1 of 14 from three point range but hit 25 of 37 free throws (67.6 percent) compared to 8 of 12 for Prairie View.